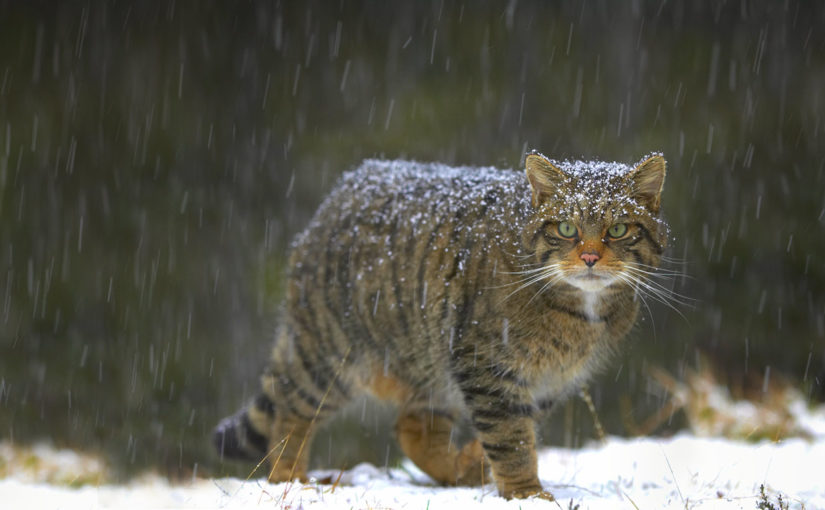 An argument’s been raging in Georgia for years now. The believers are fierce and will cuss you out for questioning them. The non-believers are dismissive and condescending.

I guess I’m a wanna-believer.

Some people say that there are still Big Cats roaming North Georgia. Cougars, or Florida panther.

State officials scoff at this and say that there have never been clear photos taken of these animals. They say that the Big Cats died out many decades ago.

Well, the other day when we were driving in the Chattahoochee National Forest, we saw a big cat crossing the road. He vanished in three seconds. Didn’t get a photo.

Note: That’s “big cat” not capitalized. This was not a cougar, mountain lion or  panther. (Which, by the way, are all the same species, just different subspecies.)

But – it wasn’t a domestic cat. It was too big for that. And it had a square body, very large compared to its head – like the cat in the photo above.

That cat in the snow is a Scottish wildcat. When I saw the photo I exclaimed, “That’s IT! That’s the one we saw!” I showed it to Tom, and he agreed.

In Europe, “wildcat” is a particular species. But this species supposedly never made it to North America. So on this side of the pond, we use the word “wildcat” to cover any wild feline.

Lots of people say “wildcat” to mean bobcat. And that’s what this is: Now, we might have seen a bobcat. I wasn’t paying close attention to the tail length. We didn’t see a full-on face, either.

Bobcats are definitely still around in North Georgia’s mountains. Not even the state denies that.

The University of Georgia says this about the bobcat:

The Bobcat is the most abundant wild cat in the United States, and the species of wild cat most likely to be seen in the wild. …The smallest home ranges occur in forested areas where food is abundant. … Population densities have been estimated to be as high as 2 – 5 Bobcats per square mile in forested habitats.

Aside from humans, the only natural predator of Bobcats is the Mountain Lion. Wild Bobcats have an estimated lifespan of 10 – 14 years.

But UGA also says, “A Bobcat’s legs are long in proportion to its body size.” The cat we saw definitely didn’t have long legs.

I wanna believe that it was a Scottish wildcat. That somewhere in the long history of Scotch Irish in the Appalachians, a few true wildcats got smuggled in.

Meanwhile, a column by a wildlife biologist in Georgia raised my hopes for a minute. Reading his 2010 article, I was amazed to learn that a deer hunter had shot an honest-to-God panther in Georgia in 2008.

But he then proceeded to explain how, upon examination, the panther appeared to be one that had been raised as a pet. In neighboring Alabama, it’s legal to do that.

The biologist conceded, though, that “we’ll probably never know the true origin of that particular cat.”

The debate rages on.

Today’s penny is a 2008, the year that the last panther was shot in Georgia.