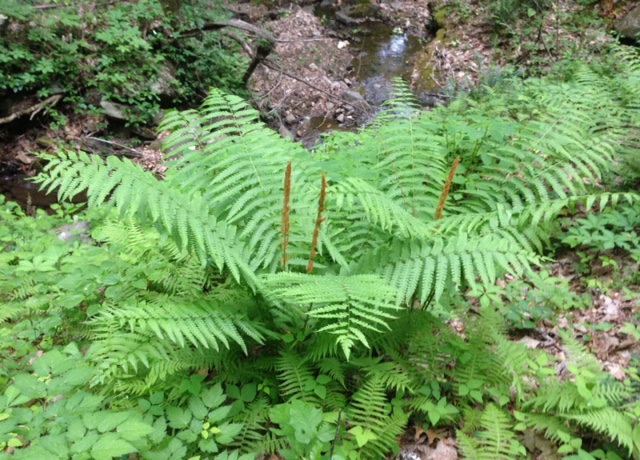 The forest fairly screams with sex these days.

Flowers are sticking their parts out, begging to be fertilized. Hey there, bee, you wanna give it a go?

And yes it is sex – it’s a reproductive act and there are male and female parts involved.

Today it was the skullcap, seducing with its purple hood: Whorled milkweed, with its baby-face perkiness, flirting with butterflies: And a lone, loud fire pink, protruding its 10 pollen-covered stamens from those shakin’-it bright petals like cleavage from a disco dress: Plants have it tough. They have to reproduce, but they’re stuck in one place; they can’t run around the forest floor looking for a mate with a martini in hand.

So their flowers are designed to entice bees, butterflies and other pollinators to come hither. Some flowers are more successful at this than others; lady slippers are entirely dependent on the gullibility of bees to enter their pink chamber more than once, even though they offer not the slightest tongue-swipe of nectar. That’s why only about 5 percent of them get pregnant every year.

It’s not just the flowers that are trying to get busy.

Cinnamon ferns, which reproduce by spores, grow big brown sticks – those are the fertile parts. The pretty green fronds are sterile supporters. Sticking up like that, the brown frond can more easily scatter its spore to the wind, finding fertile ground somewhere beyond.

Today’s penny is a 2003, because Osmunda cinnamomea spores lose their viability within 3 days. The roots are reportedly good for rheumatism.