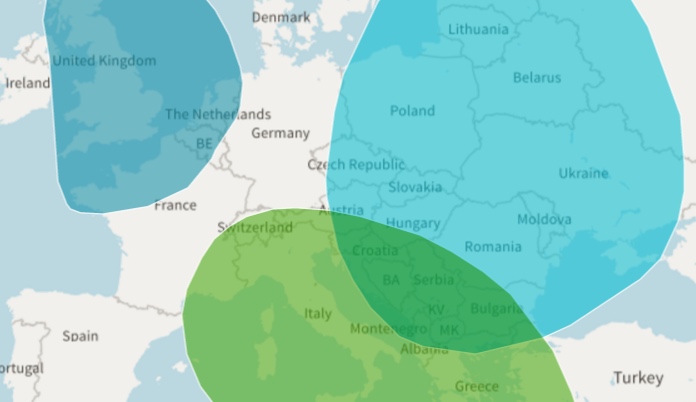 For many years, I’ve been proud to claim my German ancestry. The good qualities that Germans are known for – hard work, frugality, efficiency and organization – are ones that I like to see in myself.

I’ve always bragged that I was German, on both sides, all the way back – unusual for an American whose ancestors immigrated in the 1830s and 1840s.

I’ve researched my family tree back to the 19 ancestors who were immigrants to America. They all came from Germany or the German part of France; they all had German surnames. I can even pinpoint the villages where two-thirds of them came from.

Then I got my DNA tested.

The resulting map showing my ethnicity, above, could properly be titled, “Anywhere BUT Germany.”

I’m 17% from Eastern Europe, and 14% from Italy / Greece. There are also bits of Scandinavia and the Iberian Peninsula in my DNA, and tiny smidgens of European Jewish, Ireland, and Central Asia.

If you look at the complete map, I have to point out, it doesn’t really rule out Germans. The history of Europe is one of conquest and trade routes. “The Romans, Anglo-Saxon, Vikings and Normans have all left their mark on Great Britain both politically and culturally,” Ancestry notes. Europe East “has stood at the crossroads—and often in the crosshairs—of Europe and Central Asia.”

Conquest = rape and pillage. Not a great source of pride in ethnic heritage.

How do they come up with these numbers, anyhow?

We create estimates for your genetic ethnicity by comparing your DNA to the DNA of other people who are native to a region. The AncestryDNA reference panel (version 2.0) contains 3,000 DNA samples from people in 26 global regions. We build the reference panel from a larger reference collection of 4,245 DNA samples collected from people whose genealogy suggests they are native to one region. …

We then compare your DNA to the DNA in the reference panel to see which regions your DNA is most like. The ethnicity estimate you see on the web site is the result of this comparison.

When we calculate your estimate for each ethnicity region, we run forty separate analyses. Each of the forty analyses gives an independent estimate of your ethnicity, and each one is done with randomly selected portions of your DNA. Your genetic ethnicity estimates and likely ranges for these estimates come from these forty analyses.

Hard to argue with that.

Tom and I both had this DNA test done in 2014, and at the time I was so vexed and perplexed by my results that I set the whole thing aside.

How could I not be German? Impossible! It’s the foundation of my identity!

Last month, AncestryDNA came up with improved analytics and revised its DNA matches. But my ethnicity numbers were still the same.

So it’s time to out myself.

I’m not pure German. I’m not pure anything. I’m just a mongrel like most Americans and Europeans.

I may admire German engineering, regularly demonstrate German stubbornness, and emulate German traits. But I am not German.

It’s hard to admit to this DNA#FAIL.

My friend Dan, whose family is proud to have British ancestry, leapt at the opportunity to make fun of me.

“Blimey!  You’re more English than I am!” he wrote. “How do you explain that? Hmm…a gypsy wandered through Italy and then settled in England?  So much for beer-sloshing second cousins in the Hitler Youth.  Your people were tipping tea, pinkies up! I await your explanation!!”

My DNA discovery, though painful, made me suddenly aware of how silly my pride was.

I come from everywhere. Now that’s a heritage to be proud of.

One thought on “I’m not who I thought I was”