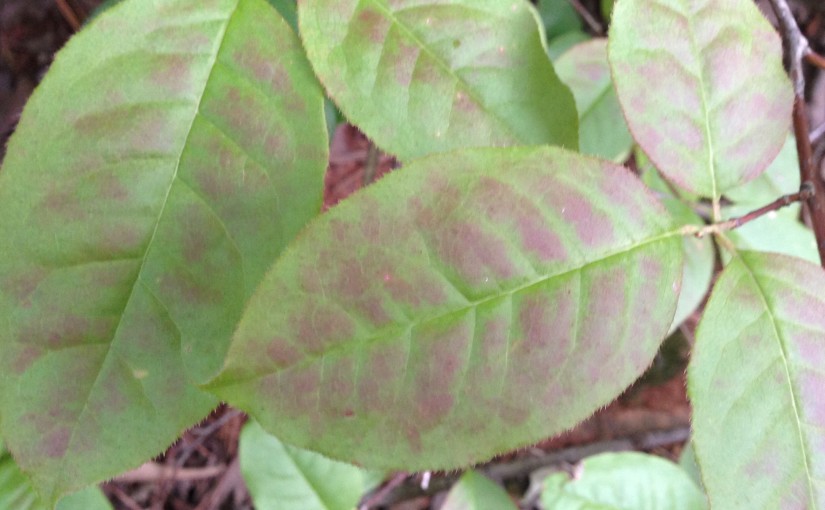 A couple days ago, I opened the front door and there they were: the reddening dogwood leaves.

This is the first sign that summer is ending. The goldenrod is already out, and soon it will be the ironweed’s turn. A few other plants are taking on the red tinge, too.

The basil is only wearily putting out small leaves now, and the lavendar is gasping its last. Although the mint, chives and oregano are still shooting back up as fast as I harvest them, I know they too have only another six weeks or so to live.

I didn’t know any of these signs before I moved to the Southern Appalachians. I lived for so many years in seasonless places like Seattle and Dubai that I forgot what little I knew about reading the turns of the earth.

My calendar now is painted with the blossoms, the colors, and growth cycles of the plants I’ve come to know. It’s a comfort, somehow, because just as some blossoms signal the end of summer, I know with certainty that I will soon smile at the glass of Parnasus and gentian blooms of fall, and it will only be a few months of winter’s witch hazel before I see the chickweed and blood root heralding spring.

Seems odd to me that people are celebrating that summer is almost over. It was hot, but … it’s summer.

While I like the fall, I feel as though summer escaped me this year. After turning the first days into molten lead, it tossed the rest over the cliff.

I regret the summer even though I didn’t do anything wrong, exactly.

I just missed it. And I don’t know how.

I choose a shiny 2015 to try and keep some small part of the remaining summer alive.