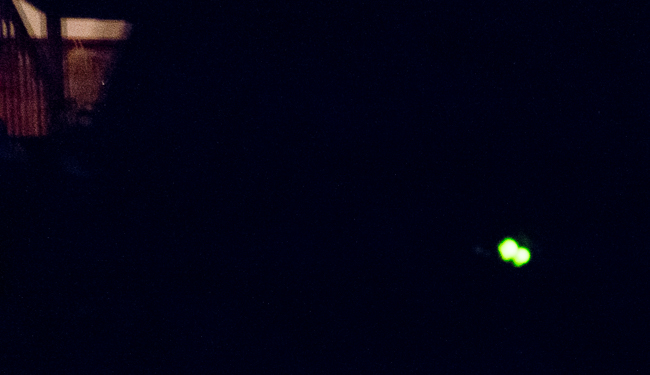 I was up at 4 a.m., roaming the house, trying to get away from the noise I was hearing outside.

It sounded like an air conditioner, one that was struggling too hard and needs to be fixed. It ran and ran and never shut off for the two hours that I was awake. The sort of noise that wouldn’t wake me up, but annoyed the hell out of me when I couldn’t sleep.

I have a futon in my office, so I went downstairs to see if the noise was blocked out there. It wasn’t.

But there was a blinking green light on the floor. Like the light from an external hard drive.

Strange that I would leave a hard drive on the floor. I reached down to pick it up, and it moved.

It flew, bobbing up and down. It was a firefly.

At first I was distressed. “Little firefly!” I said. “What are you doing in here? You’ll die! There’s nothing to eat!”

She flew up the wall, then across my art table. Blinking, blinking. Her light reflected in the fused glass.

I tried to catch her so that I could put her outside, but failed. She’d blink just long enough to get me near, then the light would go out and she would fly out of reach.

I gave up trying to catch her. I kept talking, though. She kept playing hide and seek with me.

Pretty soon I just had to laugh.

Fireflies are like that. She was just trying to get me to lighten up.

I’d already met her brother a few hours before. I was sighing as I cleaned up after dinner, thinking of all that I didn’t get done that day.

A firefly caught my eye. He was just outside the deck door. He climbed slowly up and fluttered around right against the glass.

I went over and tapped on the glass. He blinked and went up. I stuck my face near the glass and he came down. We played a little game.

I stopped caring about what I hadn’t done. I played with the firefly and he let me.

Now this pretty girl was playing, too. She blinked and ducked behind the futon.

I gave her a last laugh, she knew she’d done good. “Good night, darlin’,” I said.

I went back to bed. I put a pillow over my head to block the noise, and thought about the fireflies until I fell asleep.

Today’s penny is a 2003. That’s the second and final year of the TV series Firefly: “…a renegade crew aboard a small spacecraft tries to survive as they travel the unknown parts of the galaxy and evade warring factions as well as authority agents out to get them.”