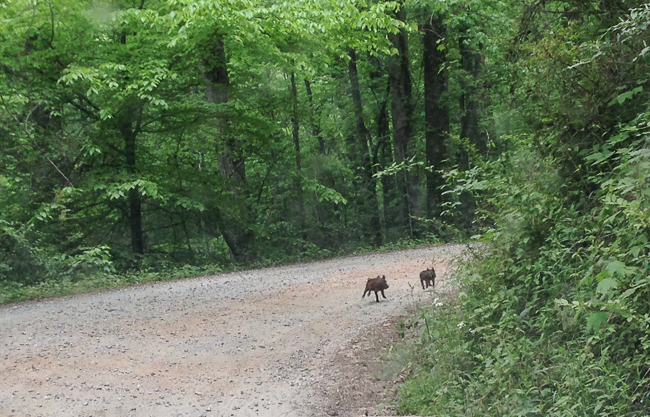 As we were driving out of the Chattahoochee National Forest yesterday, two little brown dogs suddenly popped out and began crossing the road.

Then they turned – and they weren’t dogs.

They were PIGLETS. Furry, with brown stripes.

When they saw us in Xena and heard the growl of her engine, they squealed and went flying down the road in terror. We laughed and shouted and followed them.

We didn’t see Mama Hog, but she must have been nearby.  Good thing we weren’t on foot. Mama hogs are like Mama bears in defense of their young.

Wild hogs are a big problem in Georgia and throughout the Southeast. They can do a lot of damage to farms, native plants, and even golf courses, and they have multiplied out of control. They’re one of the few animals that you can shoot anytime on private land with no limits.

I’ve not encountered an adult hog, except indirectly. Hope I never do. The males average around 200 pounds, and there are occasional reports of some that are hundreds of pounds larger than that.

Their jaws are very strong – to crack very hard nuts or break bones of the carcasses they eat. They can swim and they can run really fast – up to 30 mph.

Contrary to popular legend, they aren’t aggressive and rarely attack people – usually only hunters who’ve cornered them, or people who inadvertently get between Mama and piglets. They will do bluff charges, so it’s best to stand your ground – but look for a tree to climb, just in case.

None of those scenarios came to mind when we saw the piglets. I’d have picked them up and snuggled them if I could. There’s just something about baby animals.

Today’s penny is a 2005, the year that Ian Frazier’s fabulous piece about wild hogs ran in the New Yorker.