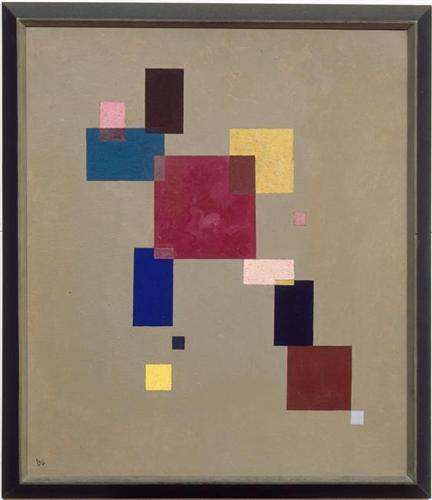 Can you build a whole painting around a single square of color?

You can learn to, if you play around.

That’s what I’m doing by playing with colored rectangles derived from those used by Wassily Kandinsky in Thirteen Rectangles.

Although the arrangement of Thirteen Rectangles seems random, each shape and its color is part of the dynamic whole. Kandinsky built the entire painting around a single red square, and used it to illustrate some of his ideas about color.

He did other paintings in that year, 1930, playing with the same idea that “a single color or form may be made the basis of a composition.”

I thought it might be fun to design my next fused glass piece with my own interpretation of this painting.

I analyzed the painting by tallying descriptions of the 13 shapes and their colors, then noted their relationships in space.  I cut out shapes approximating those used in the painting, from construction paper, and then built compositions trying to apply the Kandinsky rules in a new way. It was a great, tactile way to discover how color relationships and small amounts of space affect the overall.

Here are two examples. The first one I arrived at after about 10 attempts. The second one I did this morning, after sleeping on it, and I feel this one has more momentum of movement away from the center: I was starting to think that this would make a fun game kit: 13 rectangles that you have to arrange around a theme, in a timed exercise.

Turns out that something similar already exists – in digital form – and you can play with it right in your browser. It’s an interactive painting, and you pick up and move around the pieces with your mouse. They are semi-transparent, just as some of the pieces in Kandinsky’s painting were.

My 30-second stab at using it to create a more elongated painting: Even more fun is the set of commissioned pieces that artist  Mark Leary did  for the Milwaukee Museum of Art’s commemoration of Kandinsky last year. These are mobiles which riff off of Kandinsky pieces.

My favorite is Blue Viola, from Kandinksy’s Violett: And here’s his XIII, from Thirteen Rectangles: So if you’re stuck for inspiration on an artwork, trying playing with a master. It’ll definitely up your game.