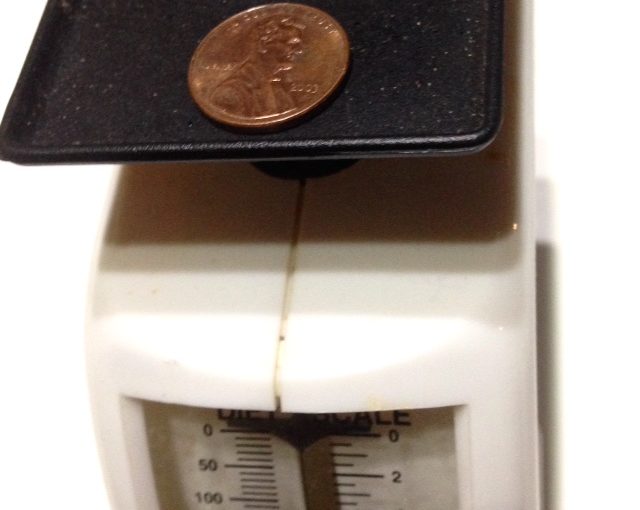 Today when I was dressing for water aerobics class, several ladies asked if I had lost weight.

“Yes, I have!” I said. “Fifteen pounds in about two months.”

So I told them. And now, for free and with no obligation, I will tell you.

There were no expensive diet supplements, no elaborate meal plans, and no secret superfoods.

I decided that my biggest problems were nervous eating and portion control. And that the missing ingredient for me was stick-to-it-iveness.

So I made my own food plan with my own rules. The plan that works for me is this:

I eat all the vegetables I want.

I eat at least two portions of raw vegetables and at least one portion of raw fruit every day.

I drink all the herbal tea I want – unsweetened of course. It helps to calm me and avoid nervous eating.

I drink green tea instead of coffee on weekdays; less caffeine, and I avoid all the milk calories. I still have my latte on the weekends.

I drink eight 8-oz. glasses of water every day.

I mostly eat whole foods. I avoid preservatives and additives.

I don’t eat anything with added sugar. My only sweeteners are a teaspoon of honey with my almond butter, a tablespoon of brown sugar on my oatmeal, or 1/4 cup of dried cranberries as a snack, or fresh fruit with my yogurt.

I don’t eat more than 1/2 cup a day of rice, potatoes, or pasta, or (rarely) two slices of bread if I have a sandwich.

I eat a high-protein breakfast.

I eat three meals plus two or three snacks a day.

A snack is something like an apple and a piece of cheese, or a tablespoon of raw almond butter with a teaspoon of honey, or a third of a cup of cottage cheese.

I eat dinner at least four hours before I go to bed.

I do not eat anything straight out of the container. I put it in a small bowl or on a plate.

I don’t eat seconds of anything except vegetables.

I measure or weigh the portion for anything that is more than 100 calories per serving. That means I eat one ounce of tortilla chips and I weigh it on a scale.

I eat no more than two tablespoons of butter per day. Most days I don’t have any.

I limit my alcohol intake to 10 ounces of vodka per week, which amounts to six drinks total on the weekend, and I mostly mix it with club soda and lime.

I exercise at least 45 minutes, five times a week.

I consciously work at relaxing and calming myself throughout the day.

Today’s penny is a 2003, which I think is the last time that I weighed what I weigh now.