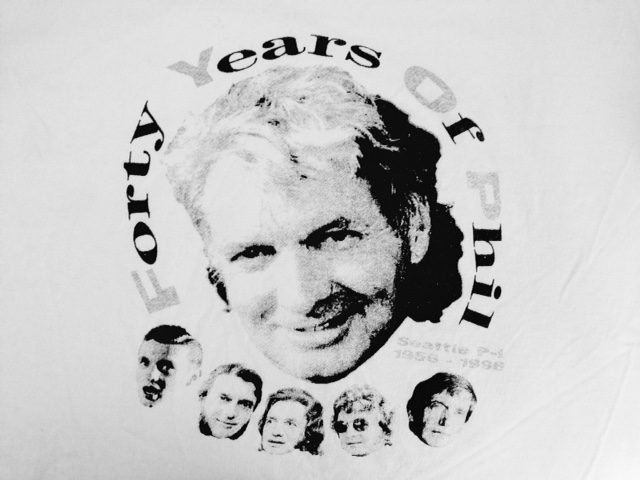 If I’d follow the advice of William Morris and countless decluttering experts, I should toss this T-shirt because it is neither beautiful nor useful.

I was weeding out clothes today, and I tried again to put it in the box. Couldn’t do it.

I tell myself that no one would buy it, anyhow, if I donated it to the thrift store.

Then I tell myself that it’s pretty weird to wear a T-shirt with images of a man who died more than 10 years ago.

Because every time I look at it, I smile.

Phil had that effect on people.

For one thing, he wore clown shoes. He had a whole closet full of brightly colored shoes, and sometimes he’d wear one red shoe and one yellow one.

He also wore clashing prints and colors – say, a fuschia plaid jacket with orange striped pants. Phil said he was colorblind. The joke was in the clothes and in his delivery.

He was a staff photographer at the Seattle Post-Intelligencer for 50 years, 1956-2006. When I started work there as a reporter, he’d already been there almost 30 years.

His wardrobe belied the fact that he was a serious photographer. Editors knew that Phil always came back with a photo.

Some photographers might whine about the lighting, too many assignments, being crowded out of the shot, not having the right expensive telephoto lens. Not Phil. He always came up with a publishable shot.

Partly that was because he paid close attention to every situation he photographed. If the person was tense, or the subject was fraught, Phil would just walk in and everyone would loosen up. He made them laugh with his goofy clothes, and put them at ease with his manner.

Then he got the shot.

He flirted with every woman in the building, but no woman would ever have accused him of sexual harassment.

I had a hard time in my early years at the P-I. Phil never made me feel dumb or incompetent, like a few other colleagues tried to. He’d say “Helloooo, sunshine,” and if I didn’t break into a smile, he’d follow me to my desk and chat with me until I did.

At his 40-year anniversary party, everyone wore the T-shirt, 40 Years of Phil, with head shots of him at various ages.

Phil had emphysema. He died at the age of 67, in 2006. I was living in Dubai then, and had not seen him in a half-dozen years, but I still had his T-shirt.

I put Phil’s T-shirt into a deep storage memorabilia box, because it seemed tacky to wear it. But then a few years later, I got it out and started wearing it again.

Because Phil would have.

2 thoughts on “The fabric of Phil”