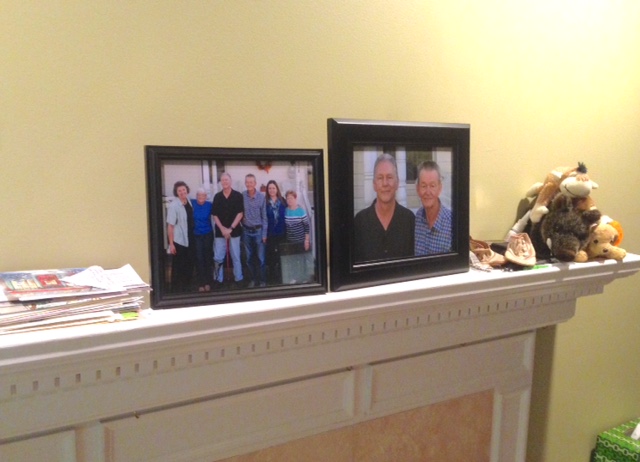 They aren’t expensive frames. Plain black wood, the kind you have to sort through in the display racks at the drugstore, and check carefully to find a couple that aren’t scratched or dinged.

After I’d put the two 8 by 10 prints in the frames, and set them on the mantel, I sat and looked at them for awhile.

Then later I sat and looked at them again.

It’s a small thing: two framed pictures on the mantel. It had an outsized impact.

One photo is a group shot of Tom and I with his newly found biological family – his father, sister, and two aunts. The other is a closeup of Tom and Richard.

We had all exchanged the digital versions of these and other photos from the family gathering in Virginia. I had 8 by 10 prints made for everyone for Christmas.

Prints are very different than digital. We’ve all grown accustomed to seeing and exchanging digital photos on our phones, tablets, and computers, in an endless stream. The sheer volume makes each image a little less valued.

We took lots of photos when I was growing up, too, but whether Kodak or Polaroid they all became prints. For my whole life, looking at family photos with my sisters and parents was the highlight of any get-together.

The prints took on their own vitality.

I have memories of events that I am too young to remember, based entirely on seeing the printed photograph with the soundtrack of my sisters telling the story, over and over.

Now we have Richard, Danielle, Jane and Sara on the mantel. They are telling us a story, too.

The prints make it more real – this miracle of a family, found.

And the biggest miracle of all – a family that opened to embrace Tom as one of their own, 53 years after his birth and adoption.

This photograph of us all together, in front of Jane’s house, solidifies the memory and repeats the story with every glimpse.

The portrait of Tom and Richard speaks of their likeness, one that grows more familiar with every Sunday phone call. At the scale of 8 by 10, a print highlights the resemblance between them in the details of their faces. Every line and curve evokes the similarities in the way they think, talk, and react to life.

The print has a visceral echo that digital does not.

Placing the prints on the mantel, where we see them many times every day, creates a subliminal effect. You walk into the room and they are there. Even if you don’t sit and study them, the prints become part of the way you see the room.

Tom’s family has a place in our lives now. Right up there next to my grandmother’s booties, my Dad’s watch, the stack of get-well cards from friends and co-workers, and our guardian pets.

For more than 30 years, my parents had on their wall four portraits in identical oval frames. Dad had made the frames and stained them to match the exact green that Mom loved.

The portraits were 8 by 10 prints of the formal senior class pictures of their four daughters. That’s almost a life-sized face.

My sisters and I used to groan when we’d come to visit our parents and see these ghosts of our younger selves on the wall. We made fun our our hairstyles, our prim expressions, the false glamor of the backdrop.

Why do you keep these up? I’d say, rolling my eyes.

I understand now. To Mom and Dad, it was like having us in the room with them.

Today’s penny is a 2015, the final year that Tom had an empty mantel.

5 thoughts on “Pictures on the mantel”