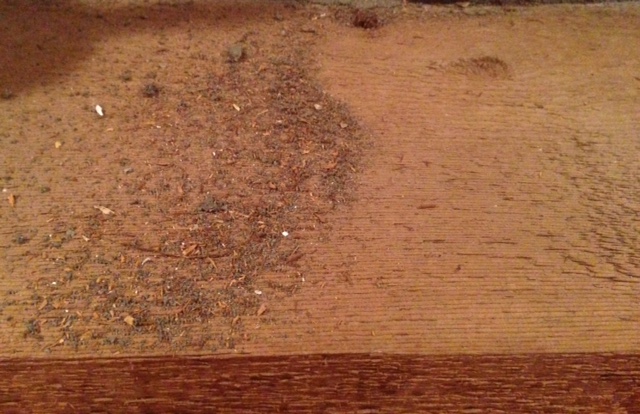 It’s the day before Moving Day, when all our belongings will be moved back into our rebuilt house.

The last interior work is being completed; the workers were delayed by snow, which made it impossible to drive to our house for four days.

The empty house is filthy.

When I walked in, the hired cleaner, David, was working on the new cedar beams in the living room, to remove the strap marks from transporting them. As we chatted, my eye was drawn to a blue dab on the wall. It was a piece of sticky Blue Tack that I’d used to keep a piece of art from shifting.

“Did you wash these walls?” I asked David.

“No, I wasn’t contracted to do that,” he said. “I just vacuumed them.”

What! “You didn’t wash them?” I said. My voice was shaking.

Our walls are raw wood panels. When dust settles on the rough grain, it catches on those wood fibers and doesn’t let go easily.

Vacuuming removes only the superficial debris. To truly clean these walls, you must wash them with a scrub brush, water, and a little Murphy’s Oil Soap. I’ve had the walls washed every few years.

I’d told Dan, the project manager, all this in email. Somehow it went right past him.

Now here I was, ready to move back in, and the walls were thoroughly contaminated.

Imagine: Massive limbs of a 12-ton oak punctured the roof and made gaping holes in the ceiling. Insulation, drywall, tree debris, and the supporting beams were broken, shredded, and dangling into the rooms. For four months they were dropping bits and fibers into the house and directly onto the raw wood walls.

Then the tarp leaked and we had water damage. The mitigation specialists brought in massive fans and turned up the heat. All that fine dust from the debris spread throughout the entire house.

After that came the drywall repairs, and the wood floors on two floors were refinished. So all the fine dust from that work was thrown against the walls, too.

When David flipped a window blind, here’s a sample of what fell: That’s what was embedded in our walls. In the house we were about to move back into.

Our homeowner’s insurance paid more than $4,000 for the cleaning of every piece of clothing and textile that was exposed to debris. Some wall hangings were deemed “non-recoverable” because they couldn’t be properly cleaned.

The staff person who delivered the textiles today expressed his regrets about the hangings. I pulled them out to look at them; they didn’t look dirty, but I began to cough. He explained, “those fine particles get embedded in the fabric, and you’d be breathing it. I would not hang these on my walls.”

The insurance paid for ProFire to pack, move, and store every item in the entire house during the construction, and also paid them to clean every possession that was in the rooms directly affected by the tree damage. That work cost more than $23,000.

But, according to Dan, it was only about $300. You don’t have to be an environmental expert to know that you can’t get a deep cleaning of a whole house for $300.

I was appalled that our insurance company, which has spent thousands of dollars to ensure that the debris was removed from all our possessions, would scrimp on cleaning the house itself.

It was after 3 p.m. David couldn’t stay to wash the walls – he figured it would take him 10 hours – and Dan said it was too late to get an additional insurance payment approved for that anyhow.

So I had a choice: Move all our clean belongings into a house contaminated with insulation fibers and debris, or wash the walls myself. Tonight.

I went back to the rental house, made Tom and I a quick dinner, and got a stepladder, tarp, buckets, a brush, and Murphy’s Oil Soap. I put up a post on my community’s Facebook page advertising “Quick cash!” and asking for help.

When I got back to the house it was 7 p.m. I filled my bucket, spread the tarp over the new floors, and set up the ladder in the corner directly under where the biggest hole in the ceiling had been. I dipped the brush, shook off the excess water, climbed the ladder and began to scrub.

The wall was so filled with dirt that the bucket water turned black after just a few panels.

I gritted my teeth and changed the water.

By the time I got halfway through the first wall, I felt as though I were carrying the whole house on my back. Long hours of hard work stretched ahead of me, and I was alone.

I’ve felt despair many times in the past year, but this was one of the worst. I had worked so hard to get everything done so that the move would go smoothly, and I should have been enjoying a leisurely dinner with Tom after more than a week apart, celebrating the return to our home. Instead, I was up on a stepladder scrubbing the walls with a brush, crying.

Then I got a phone call.

A neighbor, Jesse Goodman, answered my plea for help – even though I’d never met him before, and his wife Rachael only knows me from a few posts on Facebook. He came over after church with his stepladder, bucket, brush and tarp, and cheerfully set to work.

If Jesse had not shown up, I would have been there alone all night to get it done. And still not been able to clean the upper sections, because my ladder was too short.

Jesse worked hard and quickly, and kept an upbeat conversation going. He asked about Tom’s health, since he’d heard about his stroke. He mentioned his church, where he directs the worship program, and how their emphasis is on living the message of the Gospel – living as Jesus lived.

I have heard the words of people bearing witness many times in my life. Jesse’s witness impressed me – and not because of what he said.

Jesse has a demanding job and three children, but he came to a stranger’s house at 10 p.m. because I needed help. He listened sympathetically to my tirade about the insurance, then entertained me with stories of his own house escapades.

He climbed up to the highest parts of the walls, where the wood panels rise to meet our 20 foot ceilings, and scrubbed them. What he couldn’t reach by hand, he did with a push broom.

We were there until midnight. The walls of the upstairs loft and the main floor bathroom remained, but I knew I could do those early in the morning before the movers arrived.

I asked Jesse to invoice me so that I could attempt to bill the insurance for his time, at least. “Oh, I wouldn’t even know what to charge,” he hedged.

“I’m sure whatever you come up with will be fair,” I said.

Today’s penny is a 2015, the year that Jesse became worship director at Cornerstone Christian Church.

The featured image above shows, on the left side, the debris that came out of one section of wall just above the mantel.