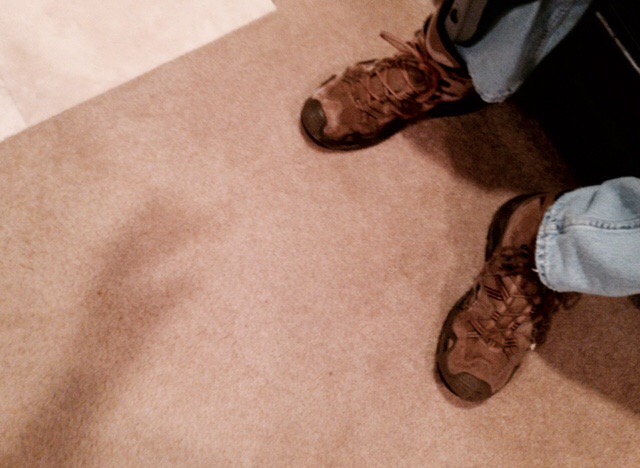 I’ve always walked fast. I was the youngest and shortest of four girls, and ever since I learned to walk, I had to walk fast to keep up in my family of giants.

When Tom began to walk again after the stroke, it was slow. One step at a time. He had to think about each one.

Stairs were precarious, especially when there were no handrails. In the background was always the risk of falling. At first, I walked ahead like an advance guard, getting rid of trip hazards, pointing out uneven stones.

Tom has been steady since his first steps; as his therapists noted early on, he has a large cone of stability. But he didn’t like to have me watch his gait, or hover too closely, because it could throw off his concentration.

So as we walked together in public, there evolved a kind of dance.

I could walk ahead of him, but not too far ahead, because then we weren’t together. I wanted to be able to talk to him. And I couldn’t appear to be leading him like a dog.

I could walk beside him, but not too close, because then I’d be monitoring him, as though to grab him if he faltered. That wasn’t necessary and it bugged him.

I couldn’t circle him like a shepherding dog. That would be annoying and distracting for Tom, not to mention looking very odd to anyone watching us.

So I learned to hover without seeming to hover.

I walk in a casual, slow way, not my normal speedy, assertive way. I talk to Tom without watching him directly, though my peripheral vision is sharp.

I go ahead a little ways if the space is narrow, but I only glance back – I don’t stop and watch him catch up. If we’re crossing a roadway, I linger slightly ahead of him in the intersection, stopping cars with my glare.

Although his gait continues to improve, over a distance it would be hard not to get ahead of him. I have found ways to wait for him without appearing to wait. I look around at the buildings, stop to check out a nice leaf on a branch, pretend to read a poster, doooo doo doo-doo.

It’s actually a fine way to practice mindfulness. I notice more while perfecting this hover craft.

When we took our walk on Christmas Day, which was about a mile and a half, Tom thought I’d be bored with his pace. I wasn’t. I saw more, took more photos, than I would if I’d been walking alone.

Tonight we went out to dinner. There were steps. I danced on them a bit, ran to check out the seating through the windows, and picked our table before we opened the restaurant door.

On the way out, Tom carried the doggie bag. I looked at storefronts and checked out cars in the parking lot. When we got to the steps, I offered to take the bag. We were talking about how tasty the food was. That was all that really mattered.

Today’s penny is a 2012, 50 years after the first hovercraft passenger service began between the English seaside resort of Wallasey and South Wales.