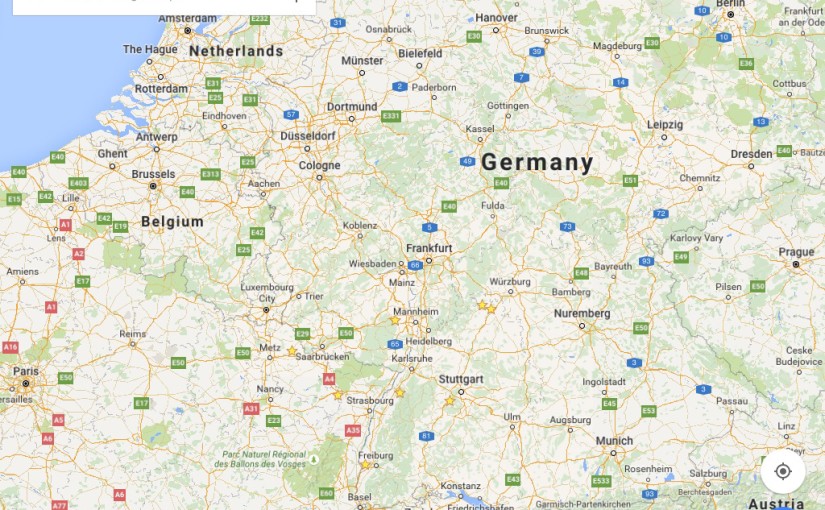 I have a map of Germany with yellow stars, marking the stops of a trip for next spring. The stars do not mark tourist attractions. None of the names would be familiar to anyone outside the region: Kulsheim, Merdingen, Weisenheim, Dornberg…

Until today, those towns were just words on a spreadsheet, matched up with names like Adelman and Greenfelder, Schaeffer and Ott. My immigrant ancestors.

Today my research had gotten far enough along that I knew the town of origin for two-thirds of my 31 immigrant ancestors. So I decided it was time to map the trip to Germany.

When I made the map and placed those stars, I saw a constellation of communications.

They were from different towns, yes, but almost all those towns were within a day or two horseback ride of each other – what we now travel in an hour or two by car.

How did they learn enough about the land and the conditions to overcome their fears and leave their homes forever?

What did they imagine Ohio to be, and what was the reality?

After arrival, they all knew each other in a short time because their lives revolved around the church, which was set smack in the midst of their farms.
They married, had children, and their children married and had children, and a century later it was my turn to be born.

Next year, I’m going back to see the land they left behind. I wonder if it will feel like home.

Today’s penny is a 2013… the reverse of 31 … for making the reverse journey of the 31 immigrant ancestors.