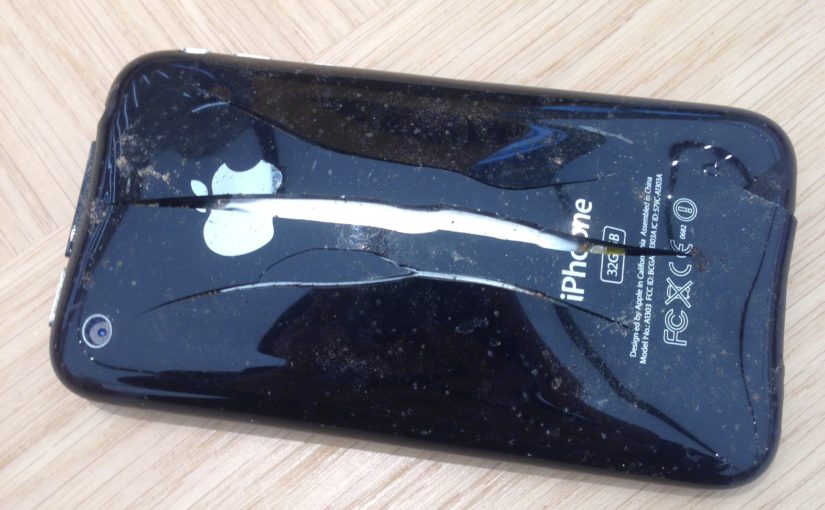 We didn’t hear it happen. We just opened the drawer one day, and there it was – an exploded iPhone.

I discovered it while we were packing for our trip to Lexington, and didn’t have time to figure out the right way to dispose of it. But I was afraid it was still unstable or would leak some horrible substance, and didn’t want to leave it in the condo while we were gone for a week. I definitely wasn’t going to put it in the dumpster.

So I took it outside, a dozen feet or so from the patio amidst the trees, and covered it with moss and damp ground. That was the best I could think of.

When we got back it was still there, damp and inert. I still didn’t know what to do with it, so I let it sit there.

Every time I looked out the back and across the patio, I felt guilty.

This morning I got around to researching what to do with it. Along the way, I learned that this has been happening for years with the 3GS and that explosion is an inherent risk of any lithium ion battery.

Apple has an online recycling program, but they specifically exclude phones older than the 4S. There was link to find out more, but it just took me in a loop back to the recycling page.

I called the nearest Apple store. I was assured by an associate that they would accept the phone for disposal.

The store is in the Perimeter Mall, which is huge. The Apple store recently moved, so it was marked wrong on Google Maps. Consequently I had a long walk to get from the car to the store, most of it inside the mall.

I haven’t been in a mall in several years. I hate shopping in any case, and malls are too big and too bright and there’s too much going on.

Once I realized that the Apple store wasn’t where Google Maps had said, I wandered around looking for a directory. There was a lot of commotion. A woman at a vendor in the middle of the hall asked if she could style my hair. Other people wore strange clothes and avoided looking at anyone else. I felt like I was a kid from the districts arriving in the capital in Hunger Games.

I finally found a directory and clambered up a long escalator to the Apple store. The red-shirted associates were all about 20 years old and all were busy. I eventually latched onto a guy who appeared to be over 30 and seemed to be a manager; he pointed me to an associate who was standing at the doorway. She flagged down yet another associate to help me. I keep thinking about Tom sitting in the car, waiting.

The associate was very nice. She was unsure whether they could accept the phone, and I said with a smile but firmly, “I won’t be leaving here with this phone.”

She had to consult a manager, and dig around in the back room for the right form, the right box. It was tempting to just walk away, but I took photos of the phone instead while I waited.

The Apple store is very surreal. It’s full of tables that are sparsely populated with shiny devices. Music is pumping like a heater and there are flashing wall displays of features that I didn’t understand.

There are almost no words anywhere.

I thought about how Tom and I have been laughing at ourselves this week as we struggle with our devices. We accidentally touch something or swipe the wrong way and end up somewhere else and can’t find our way back. We yell at the iPad the way my mom used to yell at the TV – as though there were a conspiracy to keep us down.

To be that confused by an Apple device, you know your brain really has too much going on.

Or something else has happened. Maybe our devices are starting to outgrow our ability to take care of them, like children interminably enrolled in graduate school.

I’m not afraid of consumer technology, generally speaking. I like the convenience it has brought to my life. I think it has solved an enormous number of problems, brought people together, given access to places that were hidden. Apple has designed some beautiful devices, and our iPhone 3GS was one of those.

It’s just that technology can be like an old iPhone in a drawer – explosive if you neglect to mind its risks.

The Apple associate returned. I had to sign over ownership of the phone, and she put it into a special box that gets collected by a hazardous waste truck once a week.

She assured me that my old iPhone, the exact same age as Tom’s (seven years), is fine because I keep it charged and use it to play music. She also assured me that Apple’s batteries wouldn’t catch fire or cause other damage.

She thanked me for making the effort to dispose of the iPhone safely.

Today’s penny is a 2012, the 100-year anniversary of the first work on lithium ion batteries.