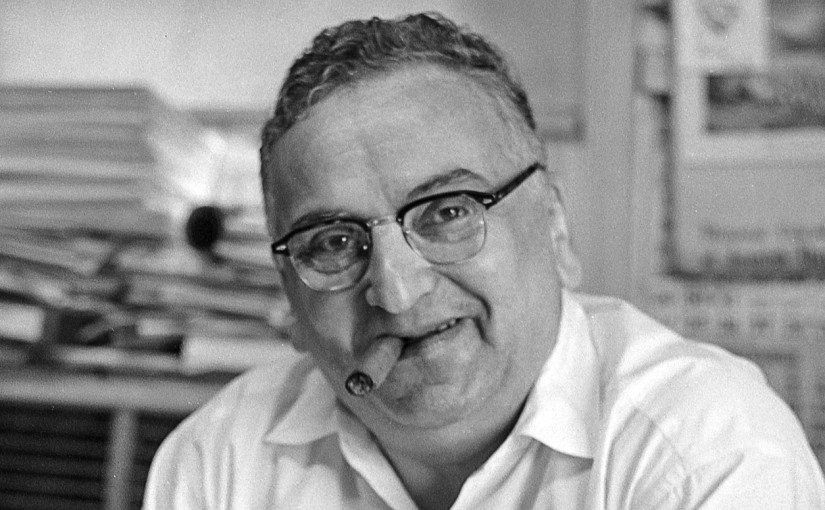 Even though he’s been dead for 35 years and I never met him.

Harry’s been on my mind a lot lately.

My longtime friend Kimberly Marlowe Hartnett wrote the definitive biography of Golden (1903-1981), Carolina Israelite: How Harry Golden Made Us Care About Jews, the South, and Civil Rights, published last year by University of North Carolina Press. She first shared Golden’s books with me in the early 1990s, and I read her manuscript several times during the decade that she was researching and writing it.

I’ve listened to her speak about Golden three times in person, including today’s talk in Athens at the University of Georgia. (There’s a great TV profile of Golden from 1966 in their special collections which can be viewed online – third link under video viewer.)

It’s a delight to attend Kimberly’s talks, because she’s a lot like Harry: funny, insightful, yet down to earth. And like him, she’s a great storyteller.

There are plenty of stories to tell about Golden. He was a genuine character – as she writes,

a middle-aged, raspy-voiced, cigar-smoking, bourbon-loving Jewish raconteur from New York’s Lower East Side when he landed in Charlotte, North Carolina, on the eve of the civil rights movement. He spent the next three decades roasting the painful realities of segregation in the warmth of his wit, first in his improbably titled one-man newspaper, Carolina Israelite, and then in more than twenty books, five of which appeared on the New York Times bestseller list.

Kimberly made Harry come to life for me.

Her biography reads the way that excellent historical fiction does – it has an engaging narrative arc and is filled with rich details – but it’s so much better because it’s nonfiction. (Even the footnotes are entertaining!)

She’s managed to write American history through the character of an extremely American guy.

Harry’s life is far too big to describe in one post. Here’s one example of a classic Golden essay topic: The Vertical Negro Plan.

Harry poked fun at Jim Crow laws by noting that it was no problem for blacks and whites to stand in lines together – they just couldn’t sit together. The solution to the controversy over school integration, he wrote, was to remove seats from classrooms.

Using humor to make a serious point was Harry’s trademark. As Kimberly says, “Once he got his reader or listener to laugh—and it never took long—he could get them to question the status quo.”

That is why I miss Harry Golden.

Yes, we have Jon Stewart and Stephen Colbert and John Oliver, and they make humor out of serious issues. Yes, we have lots of bloggers who write short, pithy essays, a form that won over Harry’s audiences decades before blogging began, as Kimberly points out.

I’m just not sure anyone’s being persuaded. We’re only watching our own favorite channels.

Harry Golden got folks to change their minds by telling stories that they understood. Stories showing ordinary life in a way that would unite Americans rather than divide them.

It took courage, because of where he lived and worked. He was a New York Jew in the South writing about segregation. He did not have the protection of distance that TV and the Internet give to political humorists today.

He lived among people who were racist, and he wrote about their town, their beliefs, and their hypocrisy.

Although he found a national audience, he didn’t run back to New York. He stayed in the South and kept writing.

I would love to see what Harry would write today.

I would love to have his courage.

I would love to inspire more people to have his courage.

I would love for my fellow Americans to be open to hearing voices like Harry’s – and be open to being changed by those voices.

We could really use another Harry Golden.

One thought on “Message received, Harry”