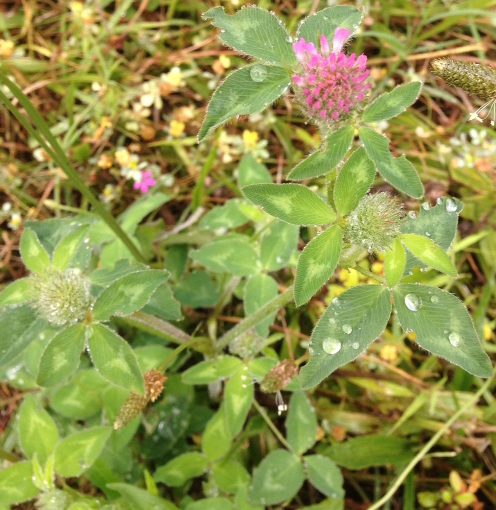 About a month ago, I was walking through Dunwoody at the perimeter of Atlanta, and over the din of cars and the MARTA train I heard a lone cricket.

In the middle of an April day, I really didn’t expect to hear a cricket within view of the gigantic King and Queen office buildings.

I was passing a field, though, which will no doubt become a construction site soon. There’s erosion fencing and a few machines hanging around.

Flower guidebooks refer to this type of environment as “waste places.” I really hate that term. Some of my favorite flowers prefer soil that’s been disturbed and then left alone.

I knew there would be something to see in this “waste place.” It’s spring.

First I noticed the bright yellow buttercups and butterweed. Then the clover and plantain. Wild blackberries, wild peas. And daisies, of course.

Diving into the grasses, I found an oddly colored cranesbill, some wild geranium, and an unfamiliar plant with fuzzy yellow ball-shaped flowers. Also a bush with round, olive-colored berries; the leaves were evergreen, but not spike-edged like a holly.

Unfortunately, the camera on my phone wasn’t working, so all the photos were out of focus. I vowed to come back.

That didn’t happen until today, and so most of the flowering plants were different. But there was plenty to look at even in this deserted urban wasteland.

I love horse nettle, despite its thorns. The bright yellow against the pale lavender is just so LOUD! This specimen was fading, but you can still get the idea. Venus’ looking glass is so diminutive that it would be easy to overlook.

The way that its leaves and buds lift from the stalk like chalices is as attractive as the flowers: Then there’s good old plantain. My herbalist teacher said this plant’s nickname is “white man’s footprint,” because wherever the white man went this plant followed. In other words, it’s just about everywhere in the world. It’s also known as “green bandaid,” though, because it makes an excellent poultice for bug bites, blisters, or any sort of skin eruption. You can just chew the leaves and then slather them onto the skin. Instant relief.

But look at those pretty, tiny white blossoms on the crown! There was more, much more. The pokeweed and dandelions abound – so common but great medicinal plants nonetheless. (The red clover, also medicinal, is pictured in the featured image above.)

So many that I couldn’t fully identify. Like that cranesbill – already gone to seed: This gleaming plant from the Asteraceae family, with shiny brown fruit: A lovely mystery plant with tight clusters of seeds that look like a tasty morsel for little birds: I even found this “weed” attractive – the flowers are miniscule: Here’s the non-holly with the berries, which were now bright red, but I still couldn’t identify it. Flowers change fast this time of year. You have to identify them while you can, or you’ll miss the chance. The white flowers had already turned to blackberries.

Today’s penny is a 2012, the year that I learned to identify horse nettle.