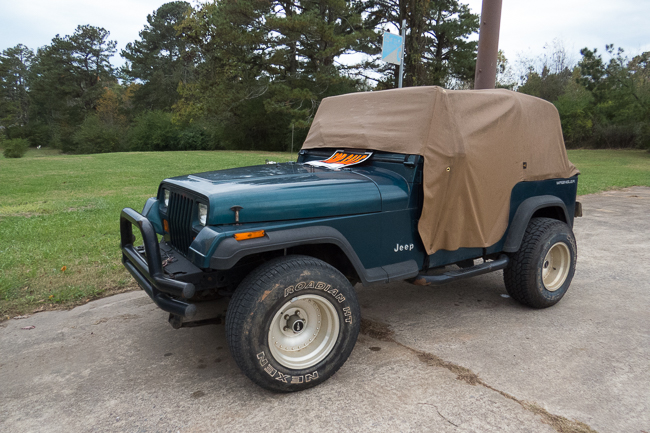 Today we sold Anna Mae, our jeep for more than seven years. I felt a real loss, as though I’d sold my youth.

If you’ve owned a jeep, you might be sighing and a little sad, like me. Or you might be clapping your hands and saying, “Good for you – good riddance!”

When you’re driving a topless jeep through the forest, you feel like you’re a bird or a fox or a deer, cruising through the trees, you belong there.

We didn’t even put the top up in the winter. We just threw on a tarp to protect the interior, and when we drove it was only with the bikini top. We had 10,000 miles of good times, bouncing through the forest on gravel roads, camping, going out to the cabin in Booger Hollow, just driving and smelling the forest.

I spotted many a beautiful flower from the open vantage point of her seats, and she’d wait patiently while I grabbed photos.

When we had a bad winter storm in 2010 and the roads were impassable and a friend died, Tom got me through to the house in Anna Mae, to comfort her daughter.

One time we were out with the top down and the weather forecast said 0 percent chance of rain, and it poured. And we laughed and got soaked and put the top on, sort of, but everything was OK because we were in Anna Mae in the forest.

The guy that we bought Anna Mae from told us that she had been previously owned by someone who died in an auto accident. That owner’s wife didn’t want to sell Anna Mae and let her sit around unused for a long time.

We thought that was sad, and we were glad to give Anna Mae a new life. Tom put a new engine in, and we kept her maintained.

But more recently, it seemed like I’d spent more time waiting on Anna Mae than driving her.

So many times when I cursed her – waiting by the side of the road for a tow truck, or pulling out our credit to pay for more repairs.

I came to feel like she just wasn’t dependable. It wasn’t exactly true – we just had to fix everything that normally goes bad on a 20-year-old truck. She drove fine, when she drove.

But I hit the wall on dealing with her. Life’s too short and I’m too old to be getting stuck in the forest with a jeep that doesn’t work, AGAIN.

Last year, she sat in the driveway most of the spring and all summer, covered with a tarp. She grew cobwebs and web nests and the ivy was starting to creep up her front tire. It made me so sad. All those good times the other years, waiting through a long cold winter, and then she spent her best months of the year unused.

In September I tried to take her for a little drive, and couldn’t get her in gear. Turned out the fluid in the transmission line had finally all dried up or leaked out. Things like that happen when a vehicle sits for too long.

So we decided to sell her. Again she sat there with a big FOR SALE sign. We got lots of calls but no one wanted to pay even the blue book value. The price went down and people would go by and mess with her top but not buy her.

I had to drive past her with that big sign on her and it made me sad every time I saw her, looking unwanted.

Anna Mae had a happy ending, though.

The guy who bought her is going to restore her. He’s a car guy – built cars to race, in fact.

He’s been feeling down because of a race he walked away from.

He won the two qualifying races, but then when it came time to run it, he got a gut feeling that something wasn’t right and refused to race. Everyone made fun of him and his friends couldn’t understand it.

So Anna Mae is going to get him out of the dumps. He’s gonna make her like new, and send us pictures.

It makes me happy to think Anna Mae is going to make someone else happy. That she’s got another whole other lifetime ahead of her.

And so does her new owner.