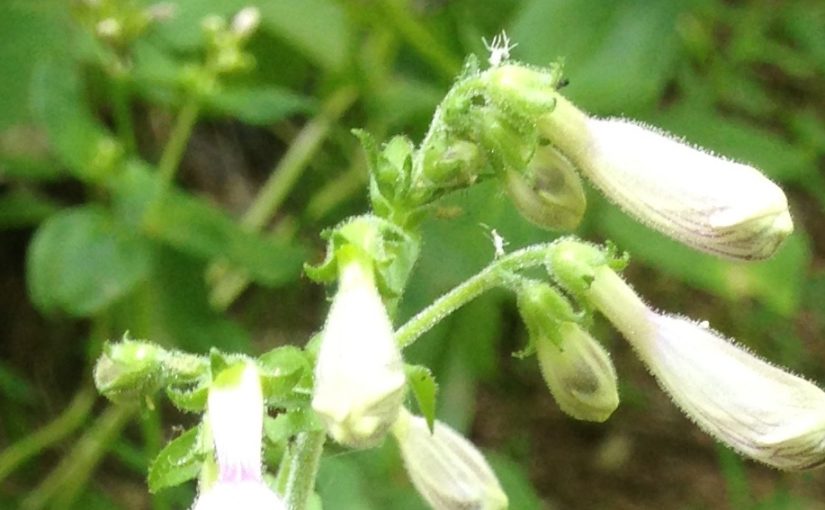 A storm was coming. I had to hike early today to beat it, because I was going to do a tough trail.

It’s one I haven’t been on in many months. But my recovery seems to be mostly over, and I felt ready to tackle it.

The trail starts out with a piece that climbs steadily but gently, and I hiked that part a couple times in May.

The extension of the trail then goes up and up steeply, on seven sharp traverses across the face of a mountain. The elevation gain in that section is about 1,000 feet or so. My best time for this hike is an hour and 15 minutes. Today, still trying to get back in shape, I was hoping to do it in less than two hours.

The lower elevations still had lots of beautiful skullcap, but only when I began the difficult upper half did I begin to see other flowers. Or maybe I just noticed them because I had to walk more slowly on the steep path.

Well, not that I could possibly miss the FIRE PINK in three places! I’ve never seen fire pink on this trail before. There were a half-dozen lovely purple spiderwort blooming – which I previously have only seen once, earlier this year: Black cohosh abounds on this trail, and it’s already sticking up stalks with flower buds: The clouds were gathering. With the temperature in the high 80s and the humidity sucking at my hot skin, I thought a bit of rain might not feel so bad.

In rapid succession, three new plants threw themselves in my path.

The first one, pale tubes with purple veins, was a puzzle. The flowers look so much like gentian, but that doesn’t bloom until September: Just a bit further on the same traverse – the yellow petals of Sundrops (Oenothera fruticosa) gave me a shock, so big and bright, laying on a rock as though to make SURE I didn’t miss it: It appeared the stem of this plant had been broken by another hiker; but another two plants were still upright.

This flower is in the same family as the Evening Primrose; it looks very similar, but blooms during the day. Another first for me.

Finally, my eye was caught by the white of a flower curled up beside some poison ivy. I followed the stem as it curved around, to its heart-shaped leaves: It’s Low bindweed, Calystegia spithamaea. I haven’t seen this plant before, either.

No doubt I’d have missed these new flowers if the rain had begun while I was hiking.

I didn’t know their names on sight, of course. I don’t usually carry my flower guidebooks on trails because I’m too lazy; I take photos and notes, and look them up when I get home.

Which gave me something to do when the thunderstorm finally arrived.

Today’s penny is a 2014, the year that the extension part of the trail was completed. My time hiking the whole trail today: one and a half hours.