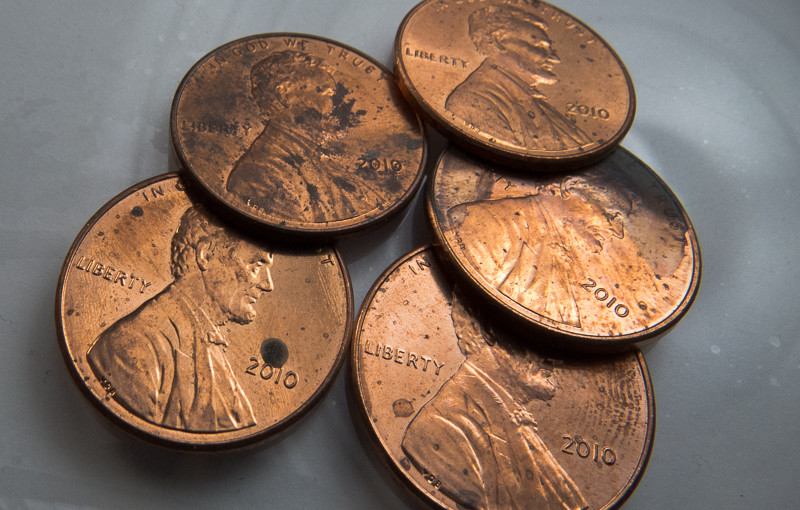 I’ve had a struggle the past few days with a tooth that’s gone bad and is throbbing with pain. I’m facing a huge dental bill that will wipe out my entire health savings account.

This was making me feel poor and helpless and old, though I am not any of those things. I was just in pain, feeling sorry for myself and very vulnerable.

I was not in the mood to read the drivel of email before my 8 a.m. team call, so I decided to sort pennies. I thought it would be cool to see what’s just laying around the house.

I took the lid off of the teacup where we throw loose change, and was astonished by the coin just sitting right on top in the middle: Yep, a 1943 steel wheat penny. Not in great shape, but it was so obvious that I cannot believe I hadn’t noticed it.

My dad was in England in 1943, in the middle of World War II, and he is always the first person I think of when WWII comes up. So it was like he’d flipped me a coin, right at the top of the heap so I wouldn’t miss it. “Thanks Dad,” I said, grinning.

I dumped the jar onto the table, and started putting the quarters, dimes and nickels back in. Along the way I found two coins that I didn’t even know existed: a Jefferson dollar, and a beautiful Jefferson nickel from the Westward Journey Nickel Series: Then I was left with a pile of pennies, about 100 I guess.

I was still admiring that 1943 steel penny when I picked up the first penny from the pile.

Yesterday I asked my Dad to drop a 2010 penny in my path – and two came along immediately. But I’d given him a specific date, August 11, his birthday, when I expected to find that 2010.

Still, I smiled at the coincidence of a 2010 being the first one from the pile. I reached for another. I carefully set the second 2010 alongside the first. And picked up a third.

Now I was weeping, with Dad at my shoulder, his reassuring presence, and I felt the full force of how much I miss him. That was so Dad: patiently putting one coin after another in front of me, to be sure I could not possibly rule out that this was him.

I could hear his voice trying to tell me: “I would never leave my little girl undefended. Or poor.”

Eventually, I wiped my tears and drew again. I got a 2009, another one that’s been very rare in my sorting (it was something of a collector’s item because of the four different reverse designs). This was the one with Lincoln reading. I laughed and said, “Thanks Dad.” The image of reading reminded me of Mom, and I said, “Hey Mom, haven’t heard from you – you need to get in the game.”

And then another one. I felt better than I have all week.

But I know what I know.