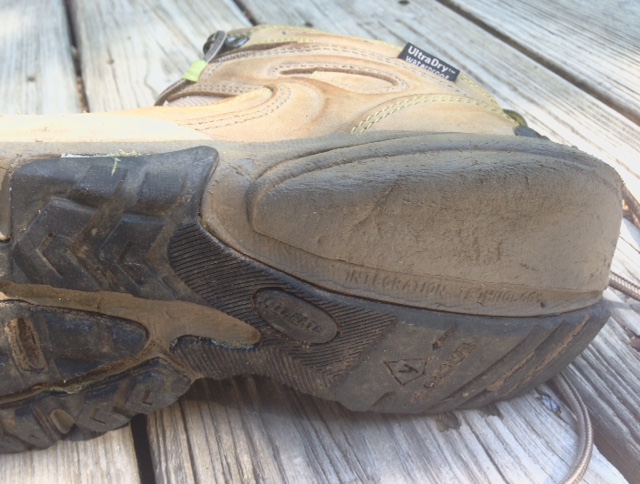 When I climbed the mountain trail last Thursday, my time was even faster than the previous week – 45 minutes up! And 31 minutes down. I was pushing, almost running in places, and the temperature was almost 90 degrees, so I was soaked with sweat.

I remember having a funny feeling on my foot on one of the down steps. It caught me for a second, but I went on.

Today I picked up my hiking boots to check the tread. These boots aren’t that old, but a few weeks ago, one part of the tread had separated and needed to be repaired with barge cement.

I saw that now the tread had started coming away in a couple new places, so I sat down with a toothpick and the glue.

Got one boot done, checked the other.

The entire heel tread piece of that left boot was gone. All that remained was the spongy gray outer.

Hard to believe I hiked on a boot that was missing a heel. Didn’t even notice it in my rush to make that great time on the trail.

Made me think about what other hazards I might have missed when I was moving too fast.

Last Friday I was driving to Atlanta when my sister Chris called. I hadn’t talked to her in quite awhile, so I answered. I was on country roads at that point, and figured I’d get off the phone before I got to the freeway.

The conversation covered some intense personal ground, though, and I didn’t want to hang up. So I kept talking. I have earbuds, my hands are both on the wheel, and I know this freeway well.

But I’m driving 75 mph and there’s a lot of traffic.

I missed my exit. Didn’t notice it at all until I had passed it. Barely got over the four lanes to catch the next exit.

They say it’s normal to be on auto-pilot when you’re traveling a familiar path. The brain is being efficient.

I say it’s how you end up with a broken leg – or in a morgue.

I didn’t start wearing them until last fall – because I’d forgotten I had them. They were in a box on the top shelf of my closet. I looked at them hundreds of times and didn’t see them.