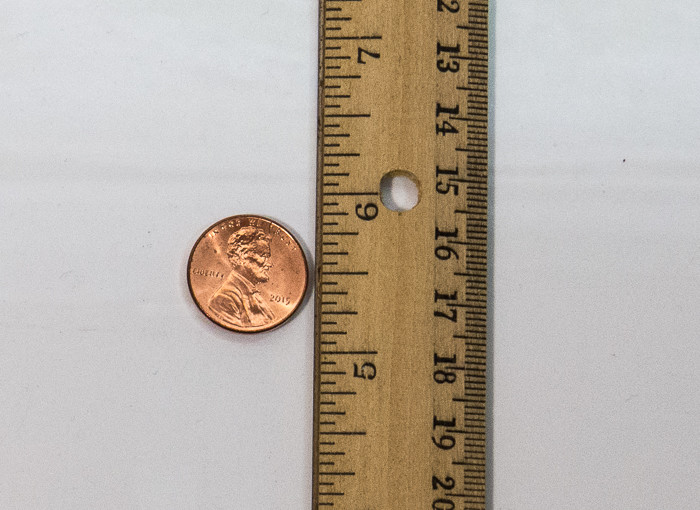 This is a question that bothers me. Most days, I’m pretty liberal in my definition of art, but other times I roll my eyes at some of the puffy, BS artist statements that elevate unskilled and lazy work: calling “art” what’s really no more than someone playing around with brushes or junk.

Don’t get me wrong. I am a big fan of many artists who make “found” art, and especially of the recent trends to make works of art from recycled materials. I can think of no finer example than Xu Bing’s “Background Stories” (as well as his “Things Are Not What They First Appear,” both shown with other Xu works at SCAD in Savannah this year).

But sometimes, garbage is just… garbage.

I like to think of this pennies pile as a sculpture. Although, I’m not a sculptor. Will I become one, by creating this work?

I like to think of this sculpture as a dynamic, three-dimensional expression of my days. But does that make it art?

To paraphrase Art Space’s defense of Tracy Emin’s “My Bed”: Of course it is, because I said so.

Art is largely defined by intent. You might have an opinion as to whether a work of art is skilled or unskilled, meaningful or blasé; but if the creator says, “I am making a piece of art,” then so be it.

Intent was key to my deliberations as I composed the beginnings of this sculpture. Discerning and refining my own intent was a long process, weeks in the making, from back in March when the idea first emerged, until now – when the first three weeks are nearly over.

But finally, today, I knew I could not continue to deliberate. It was time to cement the chosen pennies in place.

I had been hoping that a clear structure would emerge, something that creates the outline of a grand plan. I categorized, shuffled, tried different ways to create a base that would pass the test of time.

Then I realized that these pennies and their placement really are like days: You can only plan so much. Life will happen. Days will fall where they may.

Once they are over you cannot change them. You have to live with your decisions and move on.

Building on top of your past – whether it is strong, stable and beautiful, or off-kilter, messy and uncertain – is simply what makes the structure of your life. Of you.

My intent was to create a base that was stable yet flexible, one that would continue to engage a variety of days.

I was only very rigid about the first penny. With each succeeding one, I simply tried to give thought and meaning to the placement of the penny.

The first day’s penny is squarely in the center of the 11 by 14 acrylic base – I measured it: The other pennies I placed in relation to that one. So, the good, structural, strong days I placed on top of that core central penny.

The ones to do with spirit and, as today’s, art are above the center.

And finally, here it is, in its current form.

I have also done a time-lapse of the construction of this sculpture so far.

(More about the materials tomorrow.)

Today’s coin is the 2009 of Lincoln reading – you can see it directly above the center coin: Because it is a dynamic story, better than the marble Lincoln memorial of pennies past.

Because Lincoln was a man who built on the structure he was given … he built a distinguished career on top of a meager foundation, led a war to unite a divided nation, and pulled together a life that was as meaningful as any human’s has been – even though it was cut short.

Because his life was a different kind of art.