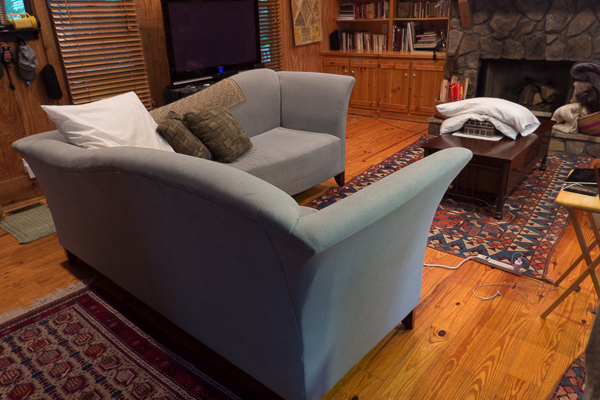 I pushed a little button and felt myself sink back… aaaah!

That’s the way I want to feel in my living room. Stretched out and relaxed.

A little voice teases me: This is the kind of furniture old people buy.

I’ve been spending a lot of time on our couch in the last couple years, particularly in the last three months. And it made me realize just how uncomfortable our couch is.

It’s a two-piece sectional that we bought in Dubai. Very pretty and modern, a lovely seafoam green. We were glad that we could make it work when we moved back to the US and bought a house, because we really loved it.

That means we put comfort ahead of just about everything else when it comes to personal purchases. It means our backs and joints need support. So today we bought a couch that has a recliner built into either end.

We had waited several months to buy it because I’d read that furniture is cheapest in February, and sure enough there was a sale this weekend.

Despite the sale, it was a big expenditure, but even my most frugal cells are not screaming. They’ve been silenced by the rest of my body. Ah…..

But it’s true that a double-recliner couch is not commonly bought by young people.

Well, some young couple can buy the pretty green sectional from the thrift store where we’re donating it.

And I will lay in the recliner and read and fall asleep.

If that’s what it means to get old, I guess I can live with that.

Today’s penny is a 2006, the year we bought the green couch in Dubai.