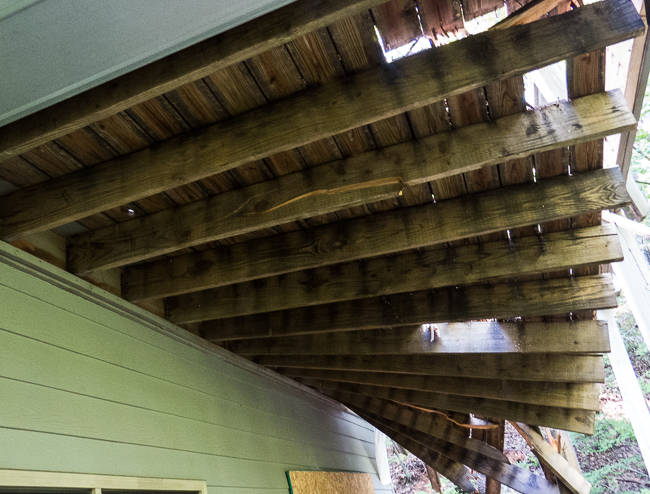 As I stepped out onto the broken deck, I felt a shifting, an instability, as though the whole house was moving under my feet. Vertigo… the house weaving as though to spin and suck me down into the earth.

Though I wasn’t there when the oak fell, the impact hits me whenever I enter the house.

We call her Azalea, and for nine years she was as beckoning and lovely as that native flower. Coming home to her after trips overseas or just after a weekend in the city, I greeted her with delight – Azalea, Azalea! Now she is a vortex of angularity. Her brokenness breaks me.

Jagged teeth in the gaping mouth of the deck floor, the craggy mountains that have erupted from the roof, shapes that knife me through. I laid down on the carpeted angles of the stairs, my abdomen heaving as my arms tried to cradle some stable part of her. Every emotion I have ever felt in this house rose up from the foundation and coated me like a poisoned placenta. Every room is empty. Yet still I find fragments left behind by the packing crew. Today it was a little drawing of Tbilisi … another place of emotion-laden beauty that I have lost.

Azalea is still mine, but being separated from her in this violent way, with all its attendant slashes and bleeding, upsets me like the death of a friend. Azalea’s crippling seems a kind of parable.

Just as we can never step into the same river twice, so I can never return to the same house, for I am changed by the currents of time.