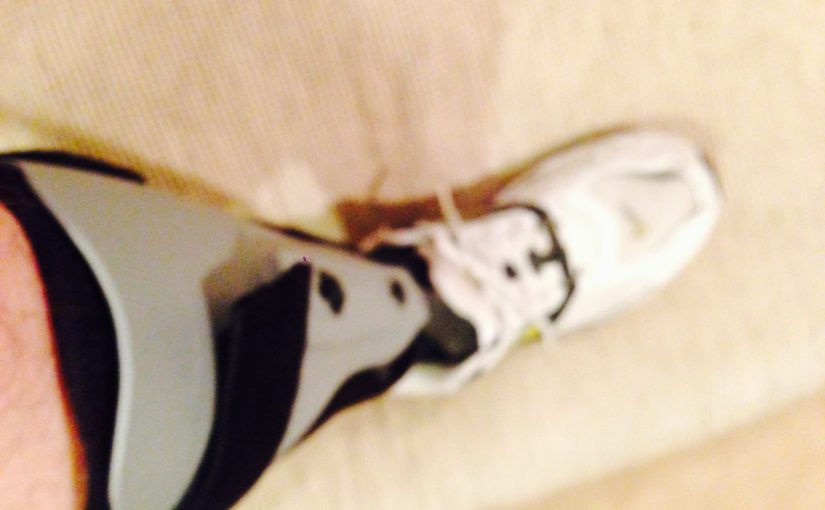 Tom went to get fitted for a brace today. His ankle and tibia muscles are weak from the stroke, which makes it hard for him to walk correctly, so his physical therapists recommended a temporary brace to assist during this stage of healing.

No metal bars or leather straps, though. A modern brace is carbon fiber, with sleek lines that follow the natural flow of the leg, and separated big toe reinforcement in the sole to support the full motion of the foot.

Tom was immediately able to walk more smoothly and with greater stability, especially in walking side to side. He really picked up the pace while walking down the hall – and kept in good form.

One small step, but a giant leap in confidence. And a mere $1,100. (Tom took the featured photo above, from his walking perspective)

While we were in the waiting room, we saw videos of people who are double amputees running, jumping, skiing, swimming, with the help of athletic prosthetics. Amazing stuff.

Worlds away from a clunky metal brace.

I got a carbon steel orthotic a couple years ago because I had bone spurs in my foot, and I couldn’t believe how it instantly took the pain away. The support allowed me to walk without pressure on those bone spurs. The orthotic weighs a few ounces and slips into my shoe. Ahhhhhh…

Braces and orthotics are cool again.

Today’s penny is a 2007, the year that Oscar Pistorius sprang to world attention with his springy lower legs.

One thought on “Braced to walk”