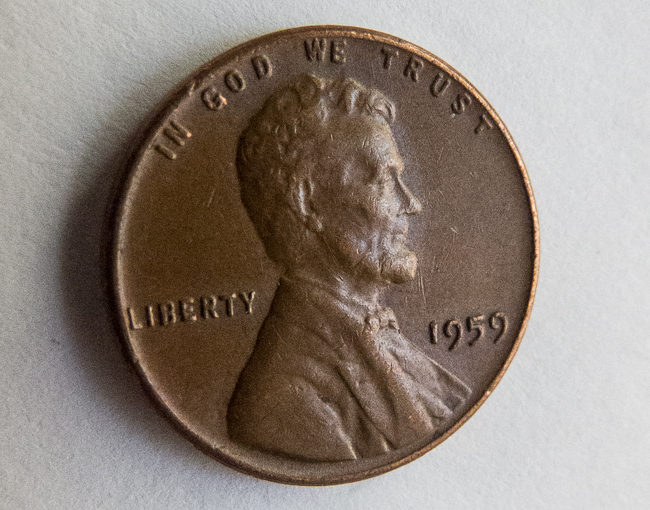 If you were born in 1959, what are the odds of pulling a penny with the year of your birth from a $25 box of rolled pennies at the bank?

In the wee hours of this morning, I came up with a completely unscientific answer: One out of 2,500.

I don’t know if I was lucky or unlucky.

In 1999, computer scientists Shiyong Lu and Steve Skiena calculated the odds of collecting an entire set of the pennies minted from 1959 through 1997.  Why did they start with 1959? Because that was the first year of the new penny design with the Lincoln Memorial on the back. Previously, pennies had the entwined wheat on the back.

Probability with pennies is not straightforward. Lu and Skiena took into account that the distribution of any given year of pennies depends on its mintage – the number of coins actually produced that year; the number of years in circulation, because coins become lost or are simply stuck in jars each year; and “collector pressure,” when collectors seek that particular coin. Lu and Skiena calculated that you would only need 684 random pennies in order to complete a set from 1959-1997. They then withdrew $20 in pennies from a bank, and found their calculations were correct – it only took them 630 pennies to complete the set.

So how come I only got one from 1959 out of a bigger sample?

Time. In the 17 years since that study was done, the odds for each year’s coins have changed.

Just goes to show you: I get more rarified with each passing year.

Today’s penny is a 1999, the year of Lu and Skiena’s study. [Here’s a copy if you want to read the whole thing]