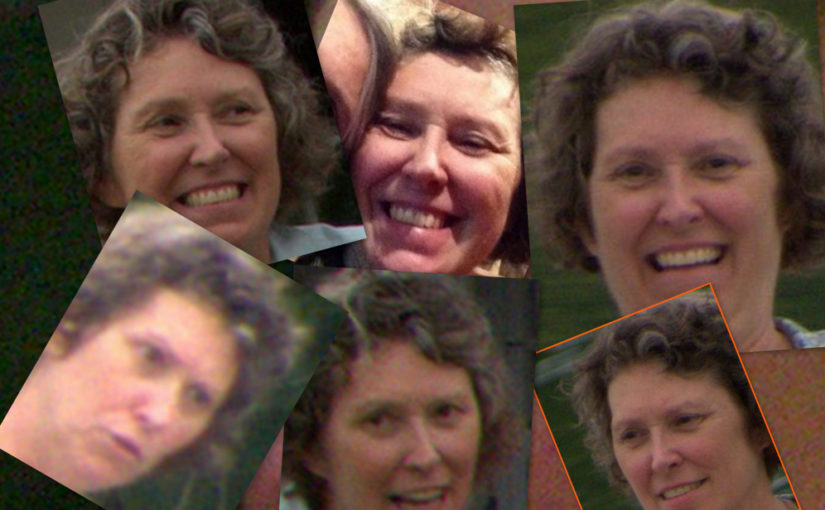 Picasa knows – even after one glance.

Facial recognition has been built into Google’s free photo editing software, Picasa, since 2009. It’s remarkably good. You type in a name on one picture of a person, and it instantly identifies and labels all your photos of that person.

If Picasa isn’t certain who the person is in a particular photo, it will throw the photo into an “unidentified” pile. When you click to add the name below an unidentified person, it will suggest its best guesses based on previous identifications.

It recognized me with a huge range of expressions on my face (as partially illustrated above).

Picasa will even recognize faces in drawings and paintings.

It recognized my mom as a young woman based on a photo of her when she was in her 50s. I identified my Aunt Bette in a current photo, where she is 98, and Picasa then picked her out in a photo from more than 50 years ago. Picasa was thrown by a photo of my dad when he was young, though. Probably because in most photos he’s bald – but as a young man he had beautiful blond, wavy hair.

Picasa guessed that this young photo of Dad was …. When I clicked on a photo of our grandma Alma in her 90s, Picasa offered my sister Ann as a possible identification. Trust me, Ann looks nothing like Alma in this photo. So maybe Picasa is predicting that Alma is what Ann will look like when she’s really old. I added Bette’s son Steve, and Picasa suggested he and Bette as possible identifications for his brother Mike.

When I clicked on a photo of Herb, Mike’s father, Picasa suggested that he was either Mike or Bette. Mary Kay, Bette’s third child, rarely shows up as a suggested identification for her cousins, though. She has beautiful skin and straight dark hair, so maybe that’s why Picasa doesn’t think she’s related to the rest of us.

Picasa did dig up one strong resemblance for Mary Kay, though. It insisted she was the only possible identification, no matter how many relatives I added to the database. As anyone would know, once they’ve seen her saintly work in hosting family reunions or tasted her heavenly desserts.

Or maybe Grandma Gertie is just having fun with us via Picasa. The face of Christ that Picasa wanted to identify was from a scan of her First Communion certificate: Today’s penny is a 2002, the year of Picasa’s initial release. That makes Picasa older than lots of people who use her.

If you don’t already have Picasa – too late. Google is retiring it.

One thought on “I’ve just seen a face”