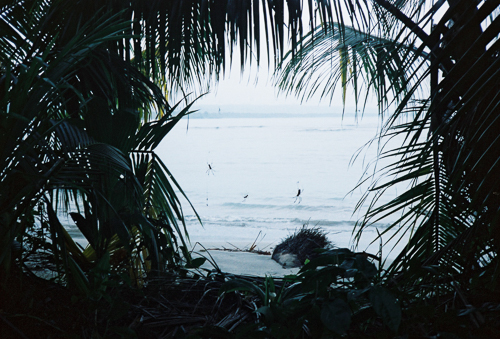 This may be the first photo I ever took of spiders. At least, spiders that I really wanted to look at. I was developing a relationship with spiders.

Costa Rica, 1989: Traveling alone, I was contemplating a divorce from my first husband. The trip was a way to prove to myself that I could make it alone.

I didn’t do a particularly good job of it. I lost my passport, lost my luggage, and didn’t know where I was half the time.

And yet I met people who helped me all along the way. Maybe that’s why I was willing to photograph spiders.

I was lazing around in my room in Cahuita, a tiny beach town on the Caribbean, and some very large spiders were also in residence. The hotel was not the sort of place where you complained about spiders in your room, because the wooden structure had so many holes that it was more like camping.

I spoke to the spiders in my best attempt at a Caribbean accent. I made up little rhymes and songs about spiders just to keep the fear at bay. I think they started to dance.

This is a technique I developed for recognizing beauty while traveling in some less-than-glamorous places. Choose something that you’re afraid of, or maybe just that you dislike, and really sit with it for a while. It’s better if you’re in a situation where you have no choice but to sit with it, either because there’s nothing else to do, or there’s no escape.

I sat with those spiders, and I came to appreciate them. They were much like the three spiders in this photo, friendly and relaxed.

These three were hanging out at the beach like a mariachi band waiting for tourists. They were a pretty good size – even their legs were visible from a distance.

The littlest one had a body nearly an inch long. The second one was bigger, and then there’s the jumbo jumbo super jumbo third spider, which I still don’t even want to think about how big it is.

I didn’t get too close to them – but I liked how they were framed by the palm trees, with the sea in the background.

I guess I had some bravery in me, since I had decided to go to a foreign country where I didn’t speak the language, and travel alone when I had no experience doing that.

Eighteen years later, when I landed in North Georgia, I got to know spiders much better. The closer I looked, the more beauty I found.