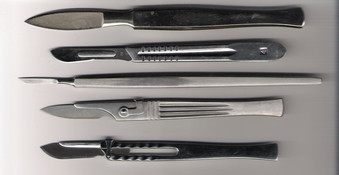 [Dec. 28] This morning, I had an anxiety attack from reading the description of my surgery.

I had downloaded my patient record from Emory. It described the surgery step by step, in clinical detail. Four pages of detail.

It was the first time that I realized what the doctors meant when they said the aneurysm was in an “unusual location.”

Mine was in the right M1 segment of the middle cerebral artery. Right in the middle of my head, at eye level, a bit toward the back.

When I read the description of what it took to get there, I was shocked.

First the prep – it was like reading about myself as a frog pinned down to a table for dissection:

Her head was fixed in 3-point cranial fixation pins… A 15 blade scalpel was used to make an incision to the level of the pericranium and hemostasis was obtained with Raney clips. A single cutaneous flap was then reflected anteriorly and secured to a Lela bar with fish hooks.

They used a “high-speed bur drill with a perforator bit” to cut my skull open, stripped the dura (the thick membrane around the brain and spinal cord) from the skull bone, and then they went layer by layer into my brain to get to the rupture:

The microscope was then brought into the field, and the sylvian vessels were identified. The arachnoid overlying the sylvian fissure was sharply divided and the temporal veins were reflected toward the temporal side.  The sylvian fissure was widely split using a combination of gentle spreading maneuvers from 2 point bipolar electrocautery, as well as sharply from Microscissors.  The M3 operculum branches were identified and these were followed down to the M2 branches. The Ml segment was identified as our dissection continued. CSF egress as we progressively opened more of the sylvian cistern was excellent.

We then had journeyed more proximally and opened the arachnoid over the optic nerve and exposed the optical carotid cistern. The lamina terminalis was opened as well for further CSF egress. The arachnoid tethering the frontal and temporal lobes to the skull were sharply divided for better relaxation, and the internal carotid artery and ICA bifurcation were exposed.

Combining the proximal and distal fissure splitting techniques, the entire sylvian fissure was split and the aneurysm was identified as projecting inferiorly off the proximal Ml MCA segment.

The patient was placed in burst suppression using propofol intravenous agent, and the mean arterial pressures were raise roughly 10% to 15% above her baseline. A temporary clip was placed on the proximal Ml segment, and a small straight Gastrogel mini clip was placed across the neck of the saccular component of this aneurysm.

You don’t need to know medical lingo to understand that a surgeon was digging through my brain.

I mean, really digging around.

Deep. In my brain.

Reading this report was the third of three online chores that I had to do at my desktop. By the time I got back upstairs, I was trembling and feeling nauseated. I went to the couch and didn’t know what to do. I was moaning and little and felt extremely shaken and anxious.

It lasted much of the day.

I still had a few diazepam (aka Valium) left, but I didn’t want to take it because I know it’s highly addictive.

I tried to do deep breathing, and meditate. I talked to Tom, and he comforted me.

He brought over my herbal tinctures – skullcap and passionflower, which are nervines that help with anxiety and insomnia and inflammation, among other problems.

I took big doses. About an hour later, I finally calmed down.

I learned later that the anxiety attack was a reaction much the same as post-traumatic stress for people who survive life-threatening events. They re-live the trauma.

I don’t want to feel this way again.

Today’s penny has to be a 2015, for the year of the surgery that triggered this reaction.

[This post was written in January, 2016 but published under the date that this reaction happened.]