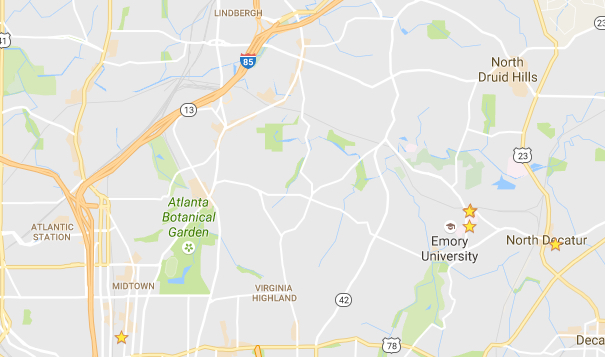 In one of my many apocalyptic visions of the future, we all have driverless cars and Google controls their routes.

When Google has long forgotten its slogan, “Don’t be evil,” it begins to force people to go places they don’t want to. It makes people late for appointments so that they lose their jobs. If Google doesn’t approve of the destination, it sends the rider on an endless circuit that never stops, like Charlie on the MTA.

But who cares about the future? I need to get to the clinic NOW. And Google will get me there.

I use Google Maps to get around because I know that Google has a lot more data than I do. Google can see a traffic jam or an accident and help me avoid it. Google knows side streets that can take me around clogged main roads. Google knows all the alternate routes and can choose the most efficient one.

I was sold on Google Maps back when you still had to plan your trip in the web browser and print out the directions. We had just moved to Georgia and Maps allowed me to explore.

Since the phone app came out with live directions, I’ve been delighted that I have been able to easily manage solo road trips without so much as a single paper map.

Plug in the address and follow the voice directions. Glance at the screen if you want to know whether the next turn is a left or right.

It’s easy, and you drive with confidence, not having to read a piece of paper while trying to drive (as dangerous as texting).

Since I now drive Tom to his many doctor appointments, I use Google Maps to tell me the fastest route, even when I already know the way.

I took the Google-chosen route. Halfway there, in the middle of the freeway, it abandoned me. No spoken directions. I had driven the route before but couldn’t remember which exit to take.

When I was sure I must have missed the turn, I saw “Re-Routing” and was directed to the next exit. I had been sent that way once before, though I couldn’t remember all the turns.

I kept following and Google kept changing the directions. At a stoplight where I was totally lost, I had time to zoom in on the map. Google was about to put me on I-85 again.

I lost it. I pulled into the nearest parking lot, turned off the directions, looked closely at the map until I could see our destination. Google now offered another route, and this one made a little sense.

I followed it, and the second I got to the road where I knew the rest of the way, I threw off the earbuds, cursing.

One other time in recent months, the app simply stopped working in the middle of nowhere in Atlanta. It got stuck on “re-routing” and I drove around aimlessly until I saw a street I knew. By sheer luck, that time, I found my way to my destination.

What a perfect analogy for my life right now.

I don’t need any more injections of confusion and out-of-control panic, thanks very much Google. I am going back to using the browser for directions, and I’ll take the routes I know. If they are longer, at least I won’t be lost and driven insane by a robot in the sky.

Today’s penny is a 2004, the year that Google acquired Where 2 Technologies, in order to convert their desktop software to Google Maps.

5 thoughts on “Off track with Google Maps”