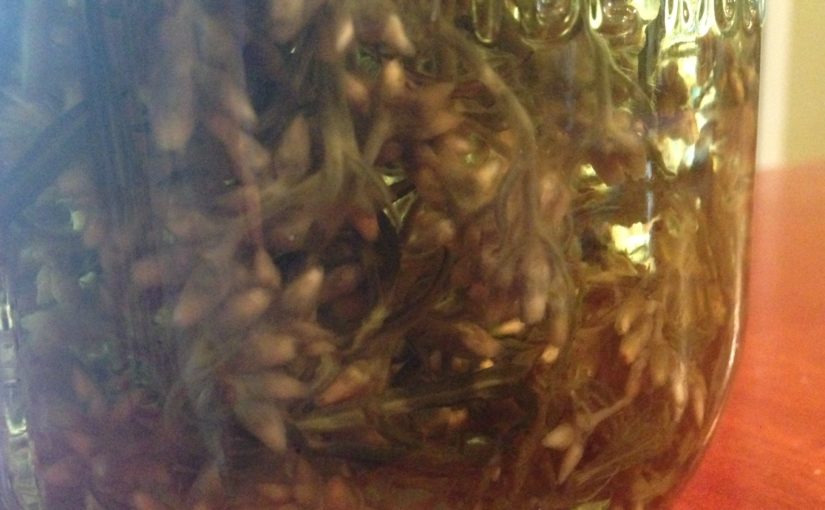 When I was studying herbs five years ago, I learned that a common weed was used by the Cherokee to treat people who had a particular psychological malady: being haunted by a ghost that caused them to want to run away.

I’ve been having that ailment lately. Some days I just want to be somewhere else. I’m too old to run away, but there is a ghost hovering with a knapsack packed.

So the other day when I saw huge clusters of rabbit tobacco growing in a field, I gathered it up and took it home. Mostly I just wanted to smell it, but I thought I could use some of the calming properties of Gnaphalium obtusifolium.

Just sniffing this herb brings you right down to earth. It has a strong, resiny smell like tobacco, but with a spicy twist. The flowers stick around for months after they have opened and dried, and will still emit that smell for a very long time afterward.

Rabbit tobacco, also known as sweet everlasting, is not much used in mainstream herbalism, but is known by us Southern herbalists as a great treatment for cough, cold, or other respiratory problems, and as a pain reliever and sedative. If you live anywhere in the south you can easily find some.

According to herbalist Matthew Wood, the Cherokee named it rabbit tobacco because

It is said that Rabbit, while untangling himself from a thicket, first discovered the properties of this plant as a cure for cuts.  It was widely used by the Indian people – as well as Euro-Americans – for this purpose.  Another story explains that Rabbit uses sweet everlasting as a tobacco to communicate with Creator, just as humans have their own kinds of tobacco.

I stuffed the whole plant, leaves flowers and stems, into a half-gallon jar and poured boiling water over it. The tea was brown and rich.

As I sipped it, inhaling deeply, memories of the mountains from these nine years came to me. The sight of the first chickweed in spring, the sound of a hard Georgia rain hitting the trees, the piney smell of sweet gum leaves when you rub them between your fingers, the taste of sassafras root tea and wild mushrooms…

After a few cups, I was absorbed in my table of art glass, making new pieces. I didn’t want to run anywhere. The ghost was gone.

Today’s penny is a 2012, the year I first harvested a bunch of rabbit tobacco near Booger Hollow.