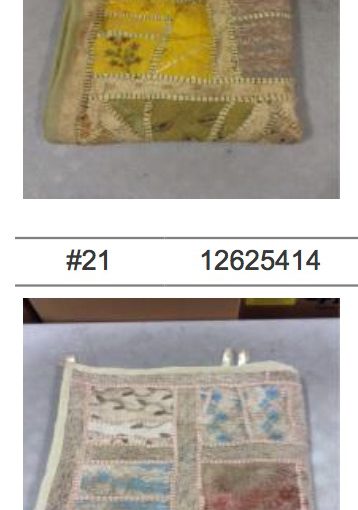 I was fussing about the Baloch tapestries.

They had been hanging on the wall at Azalea, and the debris from the tree crashing into the house had gotten into them. They were sent to the cleaners with the other textiles.

Some items were deemed “non-restorable” because they couldn’t be cleaned. The cleaners sent me a list with photos of a dozen or so items for me to claim as lost contents under the insurance, and said these items would be destroyed unless I told them otherwise.

Most of the non-restorables were just clothes and we had no particular attachment to them. But the walls hangings were literally irreplaceable. They were handmade, each one of a kind, and we bought them when we lived overseas.

I asked the cleaners to bring them back, along with a coat of Tom’s that has sentimental value. They would also be bringing all my fall and winter clothes that were rescued from the demolished closet and cleaned.

When the delivery came, I was a bit mortified to see how many clothes I have, because I know that I don’t even wear half of them. Fortunately Michael, the delivery man, was very sweet and friendly.

I opened the box of “non-restorable” items. They’d brought me all the things we didn’t want, and Tom’s coat, but no wall hangings.

I exclaimed to Michael, “It looks like they did just the opposite of what I asked!” He was apologetic but reassuring – “I’ll tell them when I get back, we’ll straighten it out.”

This wasn’t good enough for me, as I imagined our precious wall hangings sitting in a dumpster somewhere. I called the office and complained to a team leader there. She too was apologetic and reassuring.

When I got off the phone, Michael said, “I’m very sorry. We had someone filling in who wasn’t familiar with your order, because the regular guy was gone.”

“Oh?” I said, not really very interested in excuses, still digging through the box of useless non-restorables.

“Yes,” Michael said, hesitating, then continued, “His son was murdered in Alabama.”

I stopped and stood up. “What?! That’s horrible! How, what happened?”

“He had just graduated from college,” Michael said. “And he was shot on the street. Just passing by when there was a shooting. In the wrong place at the wrong time.”

I felt the pain and shock, radiating through Michael from his co-worker, hitting me … All that potential, all the time and effort a parent spends to raise a kid decently, get him through high school, get him through college, all the hope for what he can do with his life … All gone in an instant. The immensity of that grief, that loss, a physical pain that hit me right in the chest.

The loss of a few wall hangings was so insignificant, so shallow. I felt deeply ashamed to have made such a fuss.

I would have thrown away all that I owned at that moment if it could have taken away the pain of that family.

Today’s penny is a 2005, the year we bought the wall hangings.