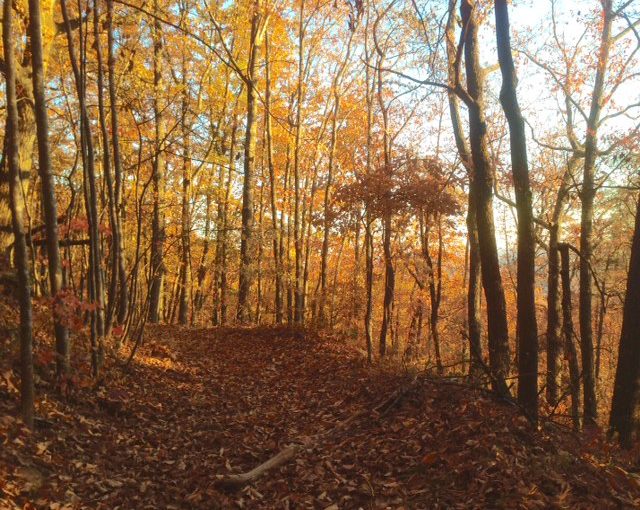 In the 1930s, the Civilian Conservation Corp built roads through many mountain forests, including those in North Georgia. An abandoned CCC road runs along the western boundary of our community, and it’s part of a long hike that I love to do in the fall.

The CCC (pronounced “triple C”) runs along a ridge at about 2,500 feet, and the view from it extends across undeveloped forest slope, away to the south and west, for miles.

I like to think about those work crews when I’m walking in their footsteps. A lot of them became soldiers in WWII, and raised the children of my generation. But in their CCC youth, they reseeded national forests, built campgrounds and dams and bridges, and built roads and telephone lines to help with firefighting communications.

The CCC workers themselves also fought forest fires. It’s estimated that in their nine-year existence, they put in 6.5 million days to fight fires on national, state and private lands. Even with a record number of fires, the total acreage lost was a historic low because of the CCC workers, according to the National Park Service.

This season’s fires in North Carolina and North Georgia are still raging, and probably will for a couple more months, because rainfall this winter is predicted to be below average.

The wind shifted a few days ago, so I didn’t smell or see any smoke in our community this weekend.

As scary as the drought has been, one positive aspect is that most of the leaves are still on the trees – there’s been no rain to knock them off. It gave me another shot at being out in the forest surrounded by color. I drove Zoe, topless, up the mountain to enjoy the view from the winding road, and to hike part of the CCC in that last hour before sunset.

After the cold snap last night, the colors have really popped, dazzling against the vivid blue sky.

I laughed, sighed, gasped, and then turned in a slow circle, breathing color, letting go.

Fall colors are like a burst of emotion – the leaves express all that I have inside. They release me from the burden of carrying so many feelings around.

When I turned around and headed back to the car, the light began to shift. And then everything, the whole forest, turned orange. I don’t mean the usual sunset-daubed late afternoon light. I mean orange like a tangerine. Everywhere.

The light, the leaves, the road, the tree trunks, all of it was orange. These photos are not enhanced – it actually looked more orange than my iphone could fully capture. The mountain was on fire. But I wasn’t afraid of this fire. It was only smoke.

Particles in smoke tend to filter out the short wavelength colors like blue, which makes the sun and sky appear red and orange. Those wildfires are coloring our world even when the smoke is too high up to hit our noses.

No CCC to hold the line, now.

Heading back down the mountain, I stopped for a viewpoint across the orange valley. At the horizon line I could see Atlanta, 60 miles away, its glass skyscrapers reflecting back at me.

We aren’t so very far apart. Any of us.

Today’s penny is a 1992, the 50th anniversary of the year that the CCC was disbanded.

2 thoughts on “The orange road”