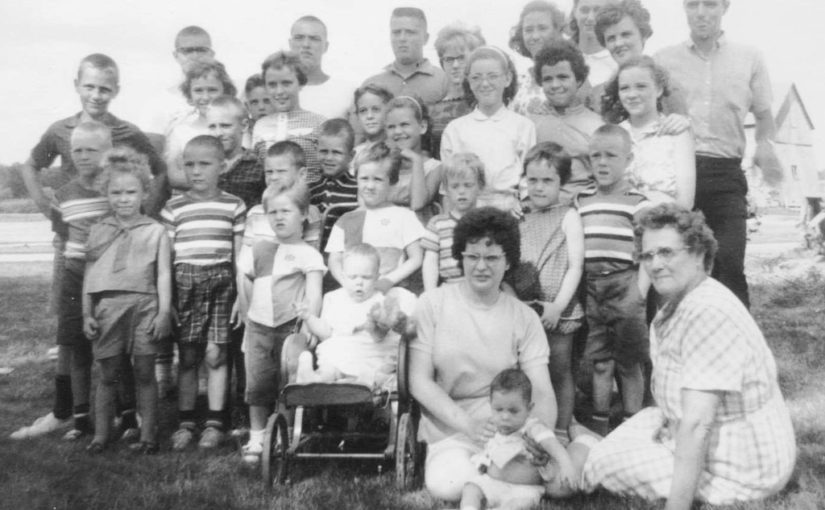 Every summer for the past five years, my sister Ann and I have come to Ohio for a week. We do ancestry research and visit old friends. And our Schnellinger cousins host a family reunion.

Every year, there’s at least a couple of relatives I don’t know. Usually I know all my cousins, but not always. I sorta kinda know some of my cousins’ children. Their kids? Forget it. There’s just too damn many of us.

I still want to know them and see their faces because we are all the progeny of Grandma Schnellinger, Alma Lavina Adelman.

She was born in 1897, married Carl Henry Schnellinger in 1917, and had eight children. The youngest child, Ray, was a babe in arms when her husband fell ill in 1929.

On his deathbed, Carl made Alma promise not to break up the family.

In those days, a farmer’s widow couldn’t take care of a bunch of kids on her own, and the children would go to live with other relatives or even be sent to an orphanage or foster homes.

What Carl asked of her was an enormous burden. He knew she couldn’t keep the farm going without him, he knew she wouldn’t be able to pay the mortgage on it. I don’t know what he thought she was going to do to feed and clothe eight children.

Carl died. They lost the farm. The Great Depression hit. They went to live first one place and then another. They moved four times while the kids were growing up. The kids all worked, but most of them graduated from high school.

Everyone tried to make Alma give up the kids. Even the parish priest. Even social services.

When one of her daughters asked her years later why she’d refused to give up the kids, Alma said, “You don’t break a promise to a dying man.”

I think Carl knew what he was doing.

He knew her better than anyone. He knew how strong she was, maybe even more than she knew herself. He knew she could do it.

She kept the family together, and all eight kids grew up to be strong, honest, hardworking, loving adults – with a great sense of humor.

Alma’s humor was legendary. We remember her wry jokes, and we laughed at our parents and our aunts and uncles as they made those jokes too. Laughter is what I remember most about Schnellinger reunions – as a kid, and now.

Only Alma’s youngest, Ray, is still alive. Aunt Mary died today at the age of 90.

But Alma’s progeny, and her legacy, live on. And on.

The photo above is Alma with all her grandchildren, in the early 1960s. Just looking at that photo makes me tired, thinking of the hours of labor that went into keeping her family together and raising her eight kids to be adults.

Today’s penny is a 1993, the year that Alma finally got to rejoin Carl – and get some rest.