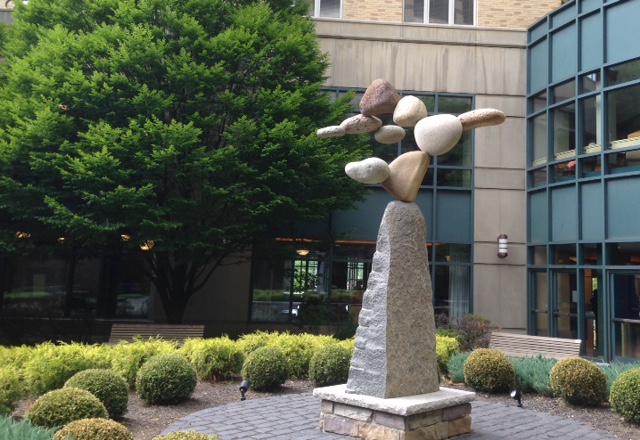 On my trips to the 1st floor at University Hospitals, I looked out at this stone sculpture.

It danced even in pieces. From some angles it flew. From other angles it seemed to be falling apart.

We didn’t really want to stay in Cleveland for Tom’s in-patient rehab of two to four weeks. I’m from Ohio, I have family here, but we wanted to get home.

In our first days in Cleveland – right after the slayings of Alton Sterling and Philando Castile, and then Dallas – the racial tension was thick enough to knock me down. The Republican National Convention was approaching, in a state with an Open Carry law.

It seemed crazy to stick around for that.

This week the whole city tensed and braced itself. Even mundane things like sushi delivery to the cafeteria became a problem: In the past two days I’ve worked intensely with the case manager at the hospital, spending hours on the phone with the insurance company, the rehab hospital, the airline, and the ambulance teams to make sure that we could transport Tom safely and in relative comfort.

Every time I encountered someone who doubted that we could fly a stroke-hampered man on a commercial flight, I recalled the guy on our flight to Cleveland. “I know this can be done,” I’d say, and launched into the story, again and again.

Tom has improved steadily and he can sit upright for a couple of hours at a time. But the total time of travel – transport on both ends, waiting, and flying – would be more than five hours. That’s with NO delays. He needed to be on a stretcher for as much of that time as possible.

Despite his great progress, he can’t yet walk, sit down or stand up without support and assistance. He tires easily too – not surprising for someone who had a brain injury just a week ago. We were going to need a lot of support.

With the help of the terrific Community Care Ambulance company in Cleveland,  personalized attention from Delta, and assistance from a thousand strangers along the way, we got Tom on the flight.

A Cleveland policewoman had to get federal permission to let the ambulance park alongside the roadway in front of Departures. But she did. TSA had to escort the ambulance attendants separately from Tom and I because we are Pre-Check cleared and they weren’t. They made it as smooth as possible.

The Delta rep, who helped us at every step, apologized that Tom had to be carried past gawking passengers. We joked that he would just practice doing a “queen’s wave” to the crowd.

The flight left on time and landed a few minutes early. I was downright giddy that we had pulled it off.

We’d bought first-class seats in Row 1. As I watched the sea of clouds taking us further and further south, crossing highways and then mountains, I finally relaxed. In Atlanta, though, miscommunications left us stranded on the plane.

Finally attendants got Tom into a wheelchair and down to where the ambulance picked us up.

But we made it.

Tom is now settled into Emory Rehabilitation Hospital, a short walk away from where I spent two weeks in the Emory Neurosurgery ICU.

Today’s penny is a 1994, the year Community Care Ambulance was created.

2 thoughts on “Escape from Cleveland”