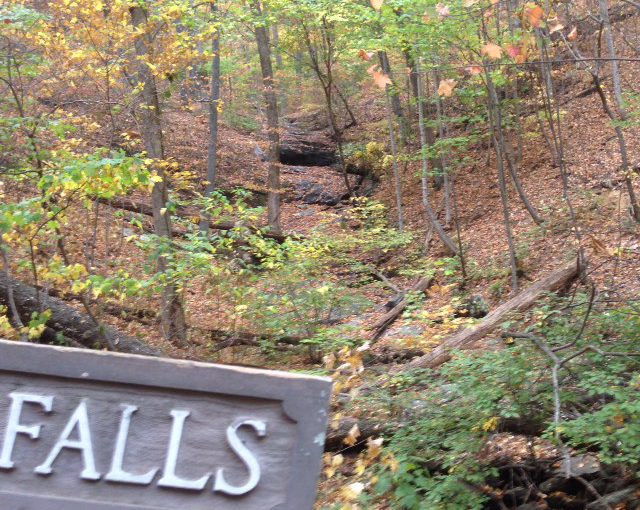 Yet another day of sunshine and 80+ degrees. I put aside the work I couldn’t finish, and went to do the toughest hike in the community.

Fall colors relaxed my eyes as the dry leaves crackled under my feet. But something was strange…

The forest was silent. Completely silent. I puzzled over it, then realized that there was no sound of water.

One of the joys of this hike is that it follows a long stream that starts above 3,000 feet elevation. You’re never out of sight and sound of the water.

All the water was gone. I trudged on, looking for water, any water. I found only the smallest pools, barely running a trickle.

The forest was eerie without water.

The silence was complete. No birds singing, no gnats buzzing.

The silence of bare rocks.

Up and up the trail. The higher I went, the drier it got. There were still patches of green – poison ivy, mostly – but the evergreen ferns were brown and withering. Most of the black cohosh plants did not flower this year, caught in the intense heat at the beginning of the drought. Those that did blossom and fruit were all dried up, the seeds at the top of their tall stalks crusted into black hulls.

I kept going, but became increasingly disoriented. Nothing looked right. The streams were no more. The crossings were on bare boulders.

No water was falling at the falls.

I’ve done this hike for five years, in all seasons. I know where the showy orchid grows and where the cinnamon fern spreads out. I mark my progress by certain trees and counting the traverses.

But today I felt lost, blindly following the path and the trail blazes. I breathed deeply, trying not to panic. Had the trail had been re-routed?

Without water, the land had become unrecognizable.  I don’t like Halloween anyhow, but today nature spooked me with the unmistakeable silence of death.

I kept breathing deeply. Smelled the forest, looked at the light, declared my intent to survive. Tried to keep seeing the beauty.

Today’s penny is a 2013, the year that this trail was officially blazed.

One thought on “A spooky hike”