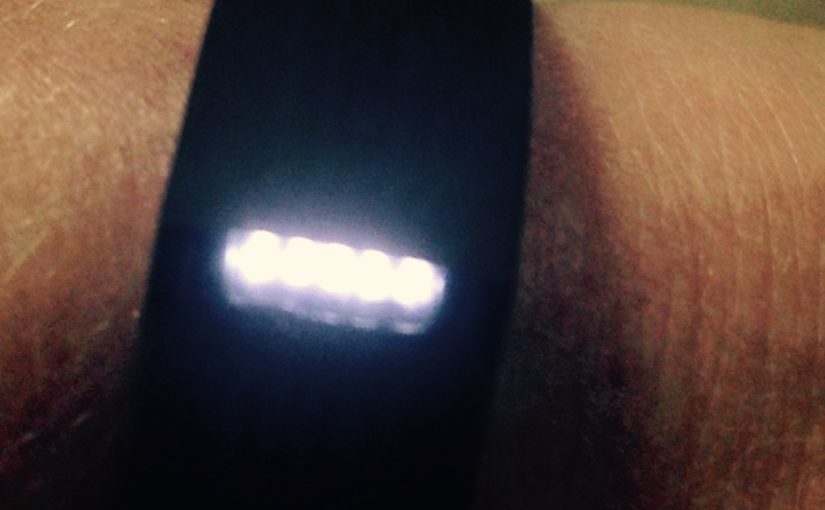 With all the schlepping I am doing lately, I figured it would be nice to get at least some kind of credit for it. So I donned Tom’s cast-off first-generation Fitbit.

It’s great to get that little party on your wrist when you’ve taken 10,000 steps in a day. In the past couple weeks, I’ve been able to hit the target even before my official workout.

I noticed something strange, though. I’d push Tom to hell and back in his wheelchair, but the Fitbit would only register a few steps.

Then I realized: The Fitbit doesn’t actually measure strides. It measures arm swings.

When you’re pushing a wheelchair, your arm doesn’t swing. No arm motion = no step.

This is a particularly cruel negation of effort when you are pushing a wheelchair with a 200-pound man in it up a steep slope, as I’ve done from the condo twice now.

Swimming also doesn’t count, since my Fitbit is only water-resistant, not waterproof. The workaround is to put it in a waterproof wrap, but then you have to somehow fasten it to your arm. I tried it with a waterproof snorkeling wallet, but it was so annoying to deal with that flapping around that I gave up.

There’s a way to add exercise to your daily activity through your dashboard app, and that’s how I get some credit for calories burned while swimming, but it still doesn’t count as “steps.”

If you want to make up for this flaw in Fitbit technology, you can still get credit if you just flap your arm, or conduct an imaginary orchestra, or practice your skills at American Sign Language.

Or you can lie in bed moving your forearm rapidly as you … well, this blog is for general readership and I don’t want to offend anyone, so I’ll just leave it to your imagination.

But only do it for as long as you pushed a wheelchair today. Otherwise, it’s cheating.

Today’s penny is a 2015, the year Fitbit went public in a $4.1 billion IPO, eight years after it first came to market.