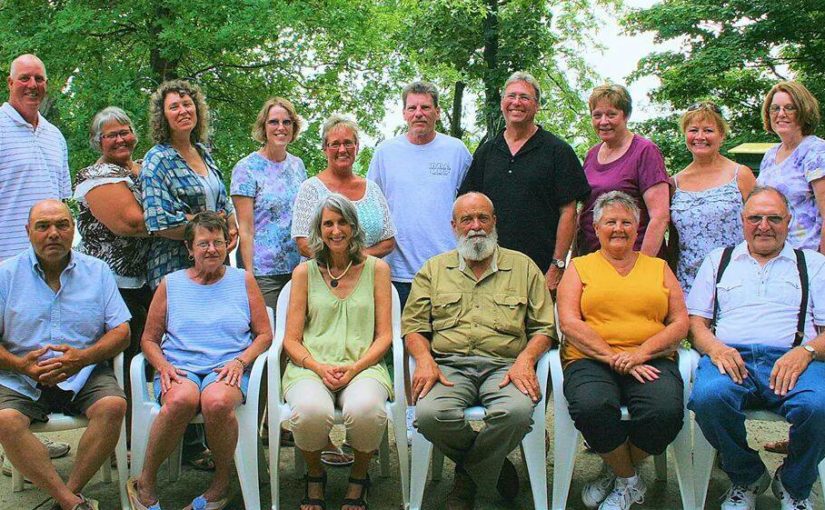 I don’t know for sure, off the top of my head, how many cousins I have. More than 30. I’d have to go to the family tree chart and count.

The photo here is from 2012, and it doesn’t come close to capturing everyone. And now two of them are gone.

Tom only had five cousins from his adoptive parents, at least that he can remember. The siblings weren’t that close, so he didn’t see his cousins much.

Now he has six brand-new cousins.

He met four of them today – all Jane’s children. Sara’s two children weren’t able to come to the gathering.

As their mother Jane had, the cousins welcomed Tom warmly. It was easy to talk to them, and to like them.

I like my cousins, though I scarcely could say I know some of them. I’ve been going to family reunions in Ohio for five years and there are still a few cousins who I haven’t seen in more than 40 years.

On the surface it would seem that I don’t actually have much in common with most of my cousins. Many of them never left Ohio, and none of them have worked in developing countries.

But when I’m with them, I don’t feel that difference. What I feel is the commonalities – the sense of humor, the memories of childhood, the shared values, and the legacy of Grandma Gert or Grandma Alma.

When we were kids, we HAD to play together when we were in the same yard. Our parents were equally strict and they were all working class folks. We all knew the same stories about our grandparents and what they endured in the Great Depression. Honesty, frugality, hard work, getting a good education – that was the package that got handed down to all of us cousins.

Tom doesn’t have that childhood experience in common with his new cousins. What they share, instead, is a loving respect for the three parents who are siblings – Richard, Jane, and Sara.

The new cousins were just as open and accepting of Tom as their parents were. I don’t know how Jane introduced the fact that Richard had a son who was given up for adoption 53 years ago, but she must have done a good job, because the meeting was as smooth as it could be.

“Cousins logic” in this family is: Jane is my mom, Jane loves her brother Richard, Tom is Richard’s son, Richard loves Tom, therefore Tom is my cousin the same as my other cousins, and I’m glad to have him in our family gathering.

If only this cousins logic could be extended a little further in the world.

Go far enough back in ancestry, and we’re all related. Follow the chain of love and respect, and you might find some people that you could have a civil conversation with – even if they don’t seem to have anything in common with you at first glance.

Today’s penny is a 2006, for the six cousins of Tom, and the six degrees of separation between any two strangers.

2 thoughts on “All my cousins”