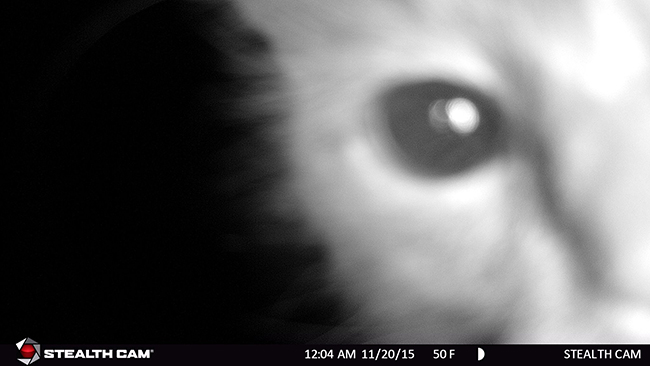 My neighbors were getting the coolest nighttime photos – bobcats, bears, foxes, and even a mountain lion!

OK, the alleged mountain lion was ultimately determined to be a house cat, but still. It was pretty exciting for awhile there.

So I bought a Stealth Cam, and set it up on the front porch with great anticipation. What would I catch on camera?

First there was this furry creature: Yep, that’s me. Curly hair and all.

I faithfully set up the camera every evening, and checked it each morning. The most exciting shot I got was this: Kind of pretty, in an abstract way.

I moved the camera to face into the backyard. There’s a clear space where the septic tank is, and we’ve often seen animals there.

I left the camera on, day and night, for about a week. The only thing it caught was the wind blowing:

Some folks were chatting about Stealth Cams on our community Facebook page, and it turns out that I wasn’t the only one shooting blanks.

Monica and Ron Burnette, however, got the hilarious “eye of the tiger” shot in the featured image, above. That photo made me laugh and laugh. I would have been so happy to have caught that one.

But I still was puzzled that I couldn’t even capture a stray cat. So I set up the camera in the bedroom, hoping it would catch me tossing and turning.

It caught exactly five frames. Here they are:

Look at those arm movements! Who knew I was doing gymnastics in my sleep? No wonder my shoulder hurts when I wake up.

But somehow, I think it missed a thing or two. I’m pretty sure that I move more than four times in eight hours.

I tried one more time. I set it up pointing at the backyard and went out there. Facing the camera, I waved my arms and jumped up and down. Then I checked the camera.

I guess I am a person of less substance than I thought.

I sent the damn thing back.

Today’s penny is a 2000, the year that GSM Outdoors launched the first Stealth Cam trail camera.