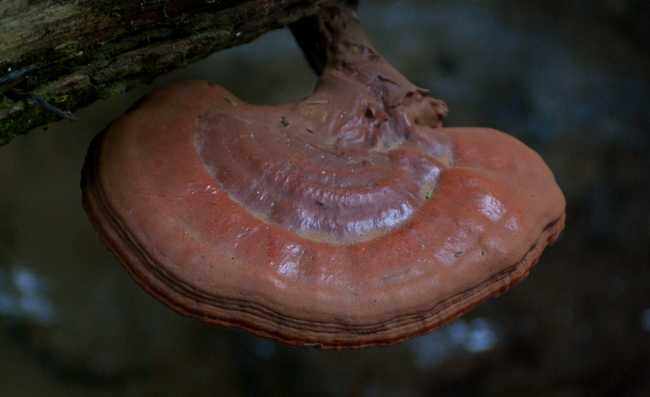 I’ve been struggling to even out my sleep schedule. Last night I suddenly knew what I needed: a cup of reishi mushroom tea.

Reishi grows in the forest, and abundantly on dying hemlocks. I photographed the one above in the Chattahoochee National Forest.

It’s a large, hard mushroom, with colored bands and a red waxy cap. As with all mushrooms, it’s important that you are certain of the identification before harvesting.

Reishi has been used for two millennia in Asia, part of traditional Chinese medicine known for its anti-aging properties. It’s prescribed by herbalists to treat viral infections, lung ailments and heart disease, boost the immune system, and ease tension.

It’s generally safe if you brew tea from it (rather than taking as a powder). Most people can drink large quantities of it without feeling any ill effects, except maybe a little bit stoned because you’ll be so relaxed – it can lower your blood pressure. But it’s not addictive.

Health Line notes, “Reishi mushrooms can cause blood thinning, however, so you should avoid it if you’re taking any medication for your blood pressure, anticoagulants, or antiplatelets.”

Costs about $45 a pound, but because the dried mushroom is very light, a pound will last you months.

Buy it sliced and snip up the slices into smaller pieces. Put a few tablespoons of it in a pot of water, bring to boil and simmer for 20 minutes. Strain and drink.

Lots of people don’t like the taste. It is a little bitter, but doesn’t taste like a mushroom. It has a tang similar to tannin in black tea or red wine, but to me this is part of reishi’s charm.

I made myself a large mug of it, brewed to a very dark strength. As soon as I took the first sip, my whole body smiled and said Yes.

Just what I needed.

Today’s penny is a 2012, the year I went to the Southeast Women’s Herbalist Conference and attended a session about fungi and mushrooms.