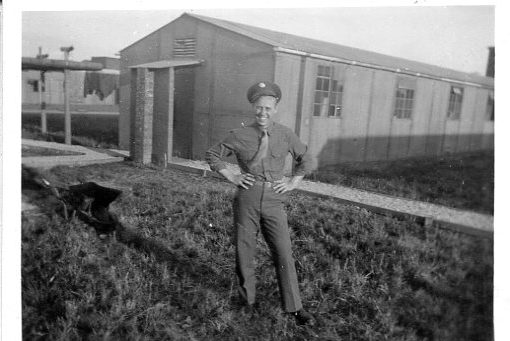 By accident, I just found online seven photos of Dad from World War II that I didn’t even know existed.

The caption for the featured photo above is “Burtonwood – Flying control personnel – 1 May 1943 Cpl Schnellinger, ‘Nice chap’.”

Yep, my dad really was a nice chap. Everyone who knew him would have said that.

Those few words “Nice chap” made me think about how Dad doesn’t just live in my memory, or in the stories that my sisters and I share.

He is part of other people’s memories, too. People I never knew, but who spent three years with him in war time.

These photos were posted on a site called the American Air Museum in Britain. The photos on the site were mostly donated by people who served, or their survivors.

Sgt. Raymond W. Zimmerman apparently served with Dad at Burtonwood, and his photos were posted on this site. That’s Dad on the left, Zimmerman in the middle, and Sgt. Gordon C. Stockinger on the right.

Dad was an air traffic controller, and his photos from the war include lots of wrecked planes. But Zimmerman’s photos capture ordinary life – at work, or just doing ordinary things like ironing his uniform: That sort of task had to be a little strange for a farm boy, but he was a dutiful kind of guy, so he did his ironing with the same easy smile as he did everything else.

It makes me so happy to think of all the people in the war who benefited from that smile.

Here he is with a buddy, identified as just Cpl. Hoffman.

And here he is out on the airfield, April 20, 1943, doing …. something, with Zimmerman and another guy named Ray, whose last name is spelled Ponezek in this caption: And spelled Ponczeke in this caption, from a July 1943 photo: Just a couple of guys in the middle of the war. At an airfield with many thousands of servicemen and women.

I don’t remember hearing Dad talk about Zimmerman and the other guys in the photos, though he probably did. I don’t know if any of them are still alive.

But someone remembers them. And they remembered Dad.

We are all linked by being part of someone else’s memories.

Today’s penny is a 2014. That’s the year that Aldon Ferguson, a historian, joined the American Air Museum site, and he is the one who posted the Zimmerman photos.

Ferguson also has his own site for the RAF Burtonwood Association.