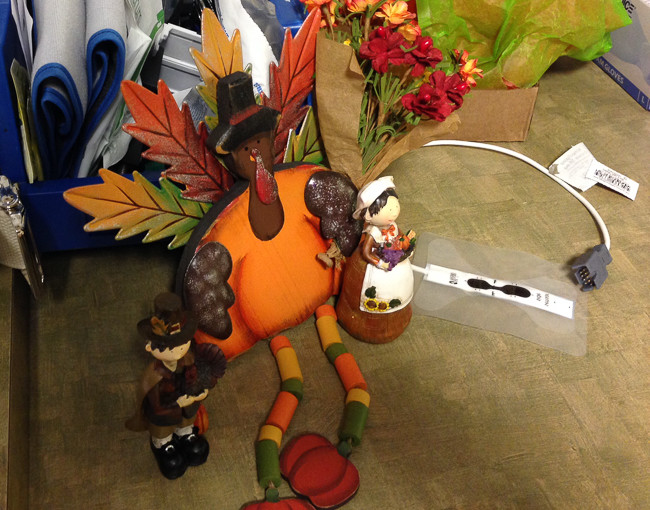 The hospital food service offered turkey, dressing, and the like, and I took it. Pretty good, really, although lacking in a certain aesthetic appeal, served on a dining tray in a sterile room. The decor from Sara was the bright spot.

I offered to share my dinner with Tom. He had a few bites, and filled up on ice cream from the vending machines – which are “evil, and awesome,” he said.

Later he found a big meal in the dining room for families. It was unmarked and presumably left for everyone who had to spend Thanksgiving in ICU with someone, but Tom wasn’t sure, and he was full from that ice cream.

It’s like that for me. This Thanksgiving is one big spread of things to be thankful for, starting with the turkey in the middle: being alive.

But who am I to thank?

The generic God, universe, Spirit – sure, I am thankful for their beneficence. I often give thanks to them; yet I don’t know who or what “they” really are.

Even attaching the pronoun “they” (or “he” or “she”) to a force that is all-powerful, all-knowing, all-present seems to anthropomorphize them into limited beings.

If I wanted to bring this down to earth, I could just thank the surgeons who repaired the rupture in my brain.

They can’t take full credit, though. The cast of a dozen who got me into their hands – local ambulance driver, ER doctor, CT technicians, Life Flight pilot, nurses – deserve thanks, too.

The circle is even bigger – stretching out to the people who didn’t even see me this week – people who built the infrastructure that transported and cared for me, including the farmers who grew my food and the inspectors who made sure it wasn’t toxic.

Clearly, this could go on and on. Keep getting bigger until we’re back to God, the universe, Spirit.

So I’ll just say I’m grateful to be alive.

And to have a reason to be alive.