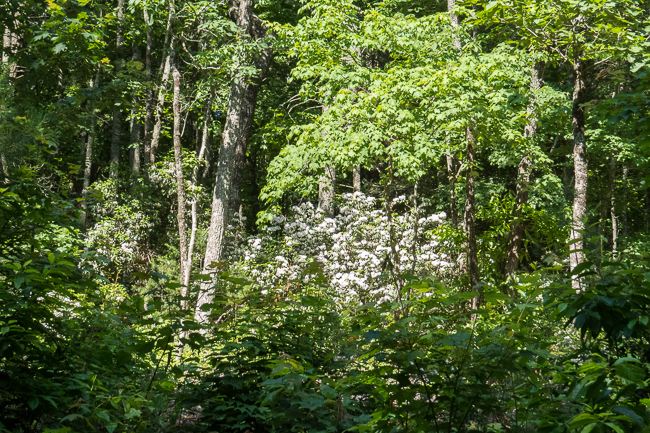 Their branches curve thick and muscled as the arms of thugs on the waterfront. Their leaves sprout glossy and tough, built to survive temperatures 20 degrees below zero. Their roots defy attacks, continuing to grow even when everything else on the tree has been chopped off.

This plant is not just a survivor, but a warrior. The pollen is violent: The flowers fling it at insects. The honey from it is toxic. All parts of it are poisonous to humans and other animals.

Mountain laurel is the badass of the forest. Were you picturing some wretched, evil-looking plant? Well, this time of year, mountain laurel is just the prettiest li’l thing. All innocent like a girl in her first party dress. White and pink blossoms shaped like china cups on a Christmas table. Clusters so thick that from a distance you’d think a dime store’s stock of gauze had been wound among the shrubs.

Except when it isn’t.

Where one grows, a hundred grow. Nobody has just one mountain laurel.

They create a thicket that the Appalachian settlers called “hell.” As in, “Jeffrey’s Hell,” presumably for the poor bastard who tried to cut his way through it. Stories from the early 20th century describe an unlucky pair getting so tangled in the laurel that it took them two days to travel three or four miles. Two DAYS.

Some say you can only get through a laurel hell if you crawl on your belly like a snake. Others describe putting boards on top of the shrubs to walk over it. That’s how thick it grows.

They made use of it, though. The wood is slow-growing and hard. They formed it into handrails, bowls, furniture.

The curve of the branches that create such a tangle is part of what makes it a lovely plant. Just try getting rid of it. I’ve got a mountain laurel next to my meditation path at the cabin in Booger Hollow. Tried to cut it off the path. My 24-inch loppers made it laugh. You’ve got to bring in a back hoe and dig up every splinter of those rock-hard roots.

Last year we cut down some large trees around the cabin. The sunlight poured in – and for the first time, our mountain laurel bloomed. Clouds of white flowers lit up the whole area. We could hardly take our eyes off it.

This year, there’s even more blooming. Looks like a wedding dress for the Queen of the Angels.

Today’s penny is a 2015, the first year our Booger Hollow laurel bloomed. Before then, we just had a hell.