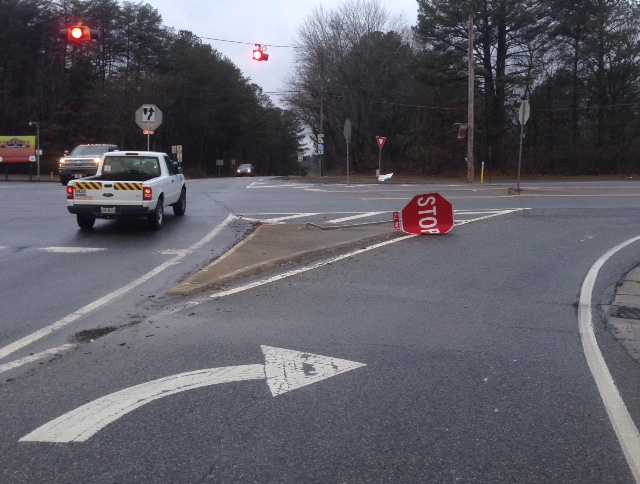 The stop sign was flattened. Pole twisted down to the road, red octagon turned vaguely upward, half in the road, as though drunk and disoriented.

It was one of those jumbo stop signs – the size that they put at major intersections where two fast roads meet.

I stopped to grab a photo because it was talking to me. A whole story lay beneath that broken stop sign. Not a story we’re likely to read in the local newspaper, though.

The sign was hit from an angle, not straight on. As though the driver had been heading straight as he approached, but abruptly decided to make a right turn – exactly where the stop sign was. Had to be a truck – a big ol’ Ford pickup, not a semi. The driver said “Shit!” when he hit the sign, and then busted out laughing and stepped on the gas, tires squealing when he made the right turn, jerking the wheel again to avoid hitting the curb.

As I walked away, I saw the rest of the story.

A woman was in the passenger side with a little kid. She yelled. Aaaaaa! Bill! Jesus! What the hell are you doing???

The kid had laughed for a second when Bill laughed, but then started crying. Maaaaaaaa! Pointing out the open window. She yanked him back as he leaned out the window, Maaaaaaaa!!

Stop it, Davis! Bill, why the hell’d you do that? says Samantha. You can’t get no more tickets, especially when you been drinking. Probably scratched the damn truck too!

Maaaaaaaaaaa! Davis still pointing, backward, out the window. Samantha rolls up the window, tells him to shut up, keeps yelling at Bill. Davis cries harder.

Samantha pokes around under the sheets and pillows, gets up and goes to the next room for her purse. Where’d you put it, Davie? Where’s Marvin?

She remembers then how Davis was playing with Marvin in the truck. Holding Marvin up and out the window so that he could fly. That’s where I found Marvin – sprawled in the grass, just a couple foot from that right-turn lane, at the point where the stop sign was laying flat. Marvin was wet and his fur was curling. I saw him and I heard Davis crying.

When Tom and I got to the thrift store, it took us awhile to unload. The whole back end of the car was filled with boxes from our storage unit.

Five boxes of Tom’s grad school books. Snorkeling masks and fins. Empty frames from my old gallery space. Wooden presses for drying flowers. A heavy woolen robe from Afghanistan. Christmas ornaments that were gifts a long time ago. Halloween costumes that were left at Azalea when we moved in – a witch’s cape, a tiger suit. Our pile doesn’t even make a tenth of what’s stacked in the donation area. Artificial Christmas trees. Toilet, jacuzzi tub, PVC pipe. A recliner love seat with one cushion ripped away. A picture frame as big as a window that holds a dozen small photos – some of the prints are still in there. A mangled Santa. A big stuffed dog with one ear loved off.

So much of the stuff we buy is like a lottery ticket – we buy it just for the chance to dream about what we’ll do when we win.

We keep them in storage for years because we loved them once.

But sooner or later they can’t be ours any more. They get run over or dropped out the window or the mice get to them or they just disappear.

Or we pack them up and take them to the thrift store, and hope that someone else will love them.

Today’s penny is a 2000, the year that our local thrift store was founded.