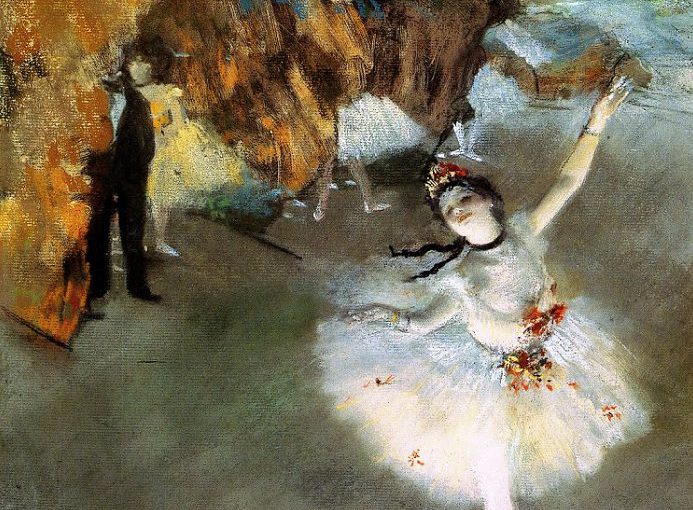 This Degas pastel, “The Star: Dancer on the Stage,” was on the cover of an album of classical music that Mom had when I was a kid. I don’t remember what the music was, but I never forgot the painting.

We are up in the rafters above the stage, looking down on the dancer just as the spotlight does. God’s-eye view.

Here she is, in her full moment of glory, spreading her arms like wings, delicate foot stepping into the spotlight. Her tutu, her breasts and the bodice, the fineness of her arm muscles, the grace of her neck, the quiet ecstasy of her features, all are illuminated.

The Star is light pink with blue shadows and cool undertones from the gray stage, a figure of lightness with a momentary calm. It would be easy to simply sigh over the beauty and see it as a lovely moment in Romantic-era ballet.

Behind The Star, vague, smeared figures of other dancers and a sharp black-suited man stand in the wings to form a pit, a crucible.

The crudeness of these figures, the warm tones of a slow dull fire, the jagged edge of the curtains, invoke the long hours of practice and the many other obstacles from which the dancer emerged.

The black ribbon around her neck flies out toward the light, even while it tugs at her neck like a leash held by those outside the performance.

One of them is the dark suited man, the abonné. These particular patrons of the ballet paid not only for season tickets but for special behind-the-scenes access to the ballerinas. The Paris Opéra and other ballet companies have been compared to brothels because of their role in setting up these relationships.

In 1800s France, being a ballerina was one of the few escapes possible for girls who came from poverty. But they needed a patron. It’s a very old story: wealth and power used to control those who are desperate.

Degas, from his hours of observing and painting the professional life of dancers, knew intimately the work and the relationships that went into being a ballet star. Everything he knew is in this 1878 painting.

Line, more than color, was central for Degas, and The Star herself is all curved lines, bedecked with delicate points of red on her flowers and crown. The backstage contrasts with vertical slashes of brush, small white ballet shoes as accents, and the strong lines of the dark suit.

A pair of ballerina feet in a sloppy First Position give the illusion, from this angle, of being atop the head of the Star, as though stepping on her and pushing her neck back.

There is always another, younger dancer.

I see a bird barely escaping a demon, taking flight on the brink of capture, falling backwards. The zenith, but also the inevitable fall to the nadir, back into obscurity from which she came.

The tension between the backstage and the spotlight allows us to see The Star rising and falling at the same time. She is just at the edge, but the backstage pit is very near.

Though the opposing elements take up nearly half of the picture, they do not override the beauty of the moment Degas captured.

No star lives forever, but while it burns, its point of light matters more than the darkness surrounding it.

One thought on “Emerging star”