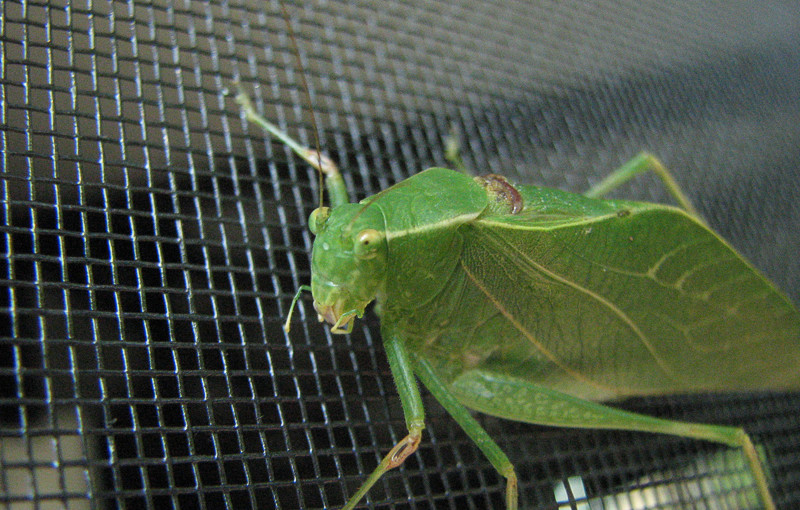 I used to think that thunderous noise at night was cicadas, but I learned that it was katydids. Yes, those sweet-faced insects that look like a leaf.

When there are thousands of them, they start to talk in rhythm, call-and-response. Some people think their debate goes: “Katy DID!” “Katy DIDN’T!”

Whatever they are arguing about, it’s intense. ‘Cuz they are LOUD.

Maybe they’re arguing about which is the best leaf to imitate. Some have long bodies, some have rounded bodies – like this one that did not want to depart from my windshield: We’ve had katydids who stuck to the car for miles, clearly the adventurous types.

I reckon they enjoy the feeling of the wind blowing 55 mph in their antenna, like a dog with its head out the car window.

They always want to come inside, too. They make sure we know they are here. It’s almost gleeful.

Last night one snuck into the house. She took up a post right where the cathedral ceiling meets the wall … because it caused her voice to be amplified.

We could hear her over the very-loud volume of the movie we were watching – the epic Noah. Even on top of the roaring seas that covered the earth.

We went to bed around midnight. Couldn’t find her; otherwise we’d have scooped her up and put her outside, as we have with so many other misguided insects.

She was still calling to her sisters and brothers outside, no doubt telling them she was hanging tough on the inside and surviving life with the human giants.

“OK, OK!” I finally said, turning off the light. “Just don’t eat those peaches in the basket.”

Today’s coin is a 2007, in honor of the summer I discovered the joy of katydids in North Georgia. POSTSCRIPT, Aug. 30: The katydid spoke up again the next night. She finally realized that the room had gone silent, because the windows were closed.

The next thing I knew, just as I was finally getting to sleep, she jumped right on the pillow next to me.

And then she sat there patiently while I found a cup and a piece of paper so that I could gather her up and take her outside where she belongs.

I guess she finally realized that I was telling her the truth when I said it was better outside.