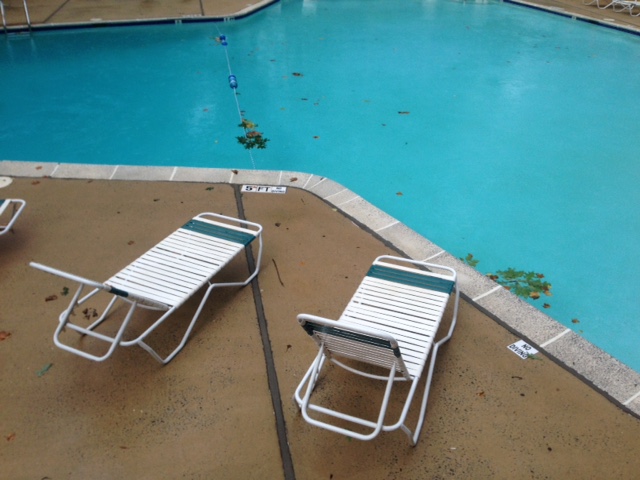 Chance of thunderstorms was around 50 percent, but we thought the skies had cleared. The last lightning strike had hit more than 45 minutes before. So we piled into the car to drive to the pool.

We really wanted to go swimming. It’s still hot, another long day, and we wanted to exercise in the water.

Skies were grey when we trundled down the ramp to the pool. We got undressed anyhow. And then the lightning hit – followed, one second later, by a roar of thunder.

We looked at each other. OK, let’s wait a bit.

I decided to take a photo and walked back up the ramp. Tom said, “Watch out for the iPhone-seeking lightning,” and I laughed as I raised my phone to take the picture.

CRRRRACCCKKKKK!! Lightning and thunder hit so close by that I flung the phone to the ground.

OK, hint taken. With my recent run of luck, being hit by lightning doesn’t seem at all unlikely.

We sat under the eaves and waited to see what would happen. The lightning circled.

Damn, I really want to go swimming. Going back home with no exercise was a defeat I didn’t want to concede.

There’s a small gym next to the pool at the clubhouse for the condos, and Tom has been meaning to see if he could squeeze in with his wheelchair and use the equipment.

So we went in just as the rain was starting.

I climbed on the elliptical wearing my bathing suit with shorts and clunky Keens, while Tom made his circuit around the room exploring.

We watched the rain pour down and lightning crackle. I counted the minutes, upped the resistance on the elliptical, and watched the miles tally.

Above us, on the TV set, the women’s basketball teams from France and the U.S. battled it out. My jaw dropped at some of the shots they made.

Tom did 50 pounds using the leg lift machine with just his weak leg, and did neck pull-downs with 30 pounds. He tried the bicycle machine, and then walked 0.4 miles on the treadmill, quickly working up to walking a mile an hour.

That speed is remarkable because his brain has to think about every single part of every single step.  The distance shows that his endurance is building up, too.

I finished my three miles and lifted some weights. The rain kept falling but eased up a little.

I went outside and cleared the ramp of all the leaves and branches that had fallen on it. Tested whether I’d have enough traction to push Tom back up the wet ramp. The rain slowed down more.

Tom climbed off the treadmill, tired but happy.

When I pushed Tom up the ramp, we felt like we’d won a medal.

The Olympics of agility and adaptation.

Today’s penny is a 1988, the year that the International Olympic Committee (IOC) signed an agreement with Sargent and Eunice Kennedy Shriver officially endorsing and recognizing Special Olympics.

2 thoughts on “A change of plan”