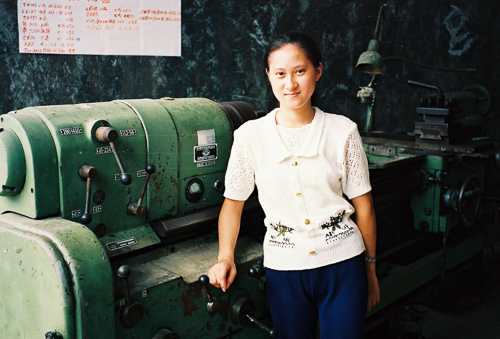 For months I had been editing stories at China Daily about how China’s moribund state-owned enterprises were being closed, disassembled, and sold off in bits. It was part of Deng Xiaoping’s ongoing push for economic reform, which he had just re-emphasized with his tour of South China.

As I traveled through South China soon after that, I looked for signs of this reform.

In Wuhan, I found a place where old factory inventories were sold. It was a field of corrugated metal sheds in rows, each with a different pile of junk. Stacks of steel bars, greasy old machine parts, and unrecognizable detritus.

The employees were sitting around, playing cards, eating snacks, men in their undershirts, looking as greasy as the metal that they had no interest in selling.

Then I came upon a shed with just this one young woman.

She had a heart-shaped face and smooth, pale skin. She was selling a large machine that looked like a press, painted in the industrial institution green.

Unlike her slovenly comrades in the neighboring sheds, she was neatly dressed in a white top and blue slacks. She smiled shyly as I made greetings and spoke in my fumbling Chinese.

As she stood there, with the natural light falling on her, she filled that ugly shed with beauty. Even the old machine, tired and dirty as it was, gained a graceful pause as she stood beside it.

It was poignant, this young woman stuck here, knowing that no one would want this machine, or anything in those sheds.

But even in this ugly place, you could find some spare parts like her. Parts that would be built into China’s engine.

Today’s penny is a 1992, for the woman of Wuhan. I wonder what she is doing now.