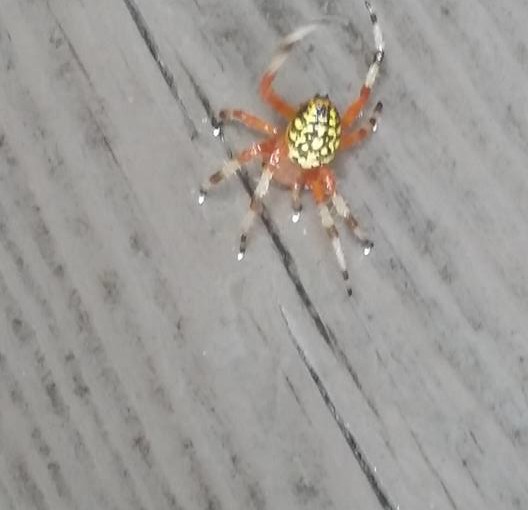 My cousin killed this perfectly innocent spider yesterday because it was scary-looking. Good thing she’s never seen me after a Jeep ride in a hard rain.

I felt so bad for that spider. I thought about her all day. She had a bright jaggy-patterned back and striped legs – a beauty, in her own way. But she got zapped with chemical death just for her looks.

Spiders have hairy legs to help them gather information and navigate the world. If you had to spin a web, you’d want all the help you could get, right? They have four pairs of eyes, but most of them don’t see all that well.

The bright colors and patterns of their outfits are part of their defense – and let’s face it, they don’t have much to defend themselves, hanging out in the open on a web. The ones that aren’t web-weavers are liable to get stepped on or scooped up by ground predators.

Sure, they can bite if cornered, but most of them don’t have fangs big enough to pierce human skin. And only two found in the U.S. can give serious bites – the black widow and the brown recluse – but even those are very rarely fatal. They aren’t aggressive, either.

Spiders are really helpful creatures – they eat insects at the rate of 2,000 a year, and they are food for birds. Watch this video to see what would happen if all spiders disappeared – we’d be overrun by insects, lose valuable species, and chaos would ensue.

I tried to tell my cousin that she shouldn’t kill it, but others were piling on about how ugly it was, and recommending ways to kill spiders. My passionate defense of the spider came too late.

This morning, when I opened the door to our deck – there she was. The very same spider. Or at least, she looked just the same.

I brushed her away from the doorway, and apologized for breaking her web. She hung there for a moment, swinging wildly, but I scooted her onto the deck. “You just picked a bad spot – but thanks for stopping by!” I told her. She stomped off and disappeared over the edge.

Whenever I’m upset about an innocent creature’s untimely death, Tom tells me, “It’s OK, they get a do-over.” I believe it.

And I hope I don’t wind up a murder victim for having a mismatched outfit and hairy legs. PS: Another reincarnate was waiting for me at the cabin. She looked very young – her colors were incredibly fresh and bright – and she was really beautiful. Isn’t she just the spittin’ image of her previous self?