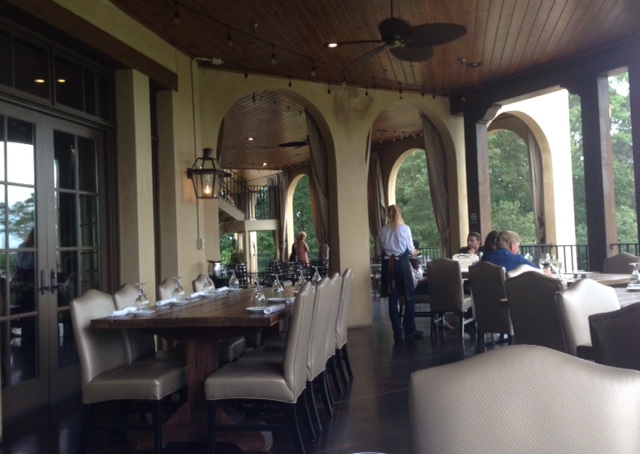 Since we have the X3, we can drive straight from our condo in the city all the way to Booger Hollow in the middle of the Chattahoochee National Forest. The ease of making this dramatic transition in less than two hours makes it especially fun.

We decided to do that for Labor Day weekend, but with a stop for lunch at Montaluce Winery, which is nestled in the hills just outside the national forest. It’s designed to look like a Tuscan village, complete with earth-toned stucco buildings and acres of vineyards, and a huge stone villa housing a bar and restaurant with sweeping views of the mountains.

Tom had been there, but I hadn’t. In just an hour and 15 minutes drive, we were transported from the commercial buzz of the Atlanta Perimeter to a romantic, placid spread of green.

I was literally agape at how much like Tuscany it looked, and how beautiful it was – maybe because it’s been so long since I’ve been in the less-developed parts of these mountains. One entree was Springer Mountain chicken, which is not actually raised ON Springer Mountain since it is federal land (the beginning of the Appalachian Trail, too). The waiter pointed to the mountain out the window when he rhapsodized about the dish. (Springer Mountain is visible in the upper right in photo above)

The small green salad was exquisitely balanced and perfectly dressed. I got the honey roasted pork loin (juniper and anise, smoked potato mash, asparagus, Vidalia onion, pistachios) and Tom had the rack of lamb (sunchoke, pinenut, oyster mushrooms, preserved apples, arugula pesto, haricot vert); both were as lovely as the view, meat that melted across fork and tongue, accompanied by veggies that stood up with character. I got a glass of Montaluce Pinot Grigio, Tom a Margarita, rare treats for both of us. It took an hour and a half to be served this two-course lunch and eat it, but it’s the kind of place where you expect slow food and you don’t mind because of the view.

(Although, the music – who would choose a ’70s pop mix with the likes of Boss Skaggs and SuperTramp in a classy villa restaurant? Annoyingly incongruous, not to mention it’s just crappy music.)

We cruised around to have a peek at the villas before heading out to the forest.

Taking our time, it was another 40 minutes to the cabin. Hard to believe that we have not been in Chattahoochee since Memorial Day. That seems many years ago.

The forest road on Jones Creek had, miraculously, finally been graded and graveled after years of complaints. No problem for the mighty Xena.

We’ve had a neighbor looking after the cabin (and all of Booger Hollow and environs, too – that’s just what he does), so we knew there would be no major surprises and no mice. He’s added padlocks to our doors and posted more warning signs since the last round of break-ins.

I got us set up – the gravity-fed water system, propane appliances and main battery plus unloading the car all takes about an hour. Tom had apologized in advance that he couldn’t help, which I kept in mind as I dug out the mucky, silt-filled reservoir for our water supply.

But we celebrated a big landmark for Tom: a four-day getaway with NO WHEELCHAIR. No use for it in Booger Hollow, and he gets around with a quad cane in the cabin as he did in the restaurant.

So unloading the car seemed a breeze. Even the 50-pound cabin battery and equally heavy jumbo cooler seemed little trouble compared to the wheelchair.

I set up the porch lounge chairs and Tom walked around the place, testing his ability to walk on rough ground with the quad cane. He did just fine.

Then the silence of Booger Hollow settled in.

We sat on the porch and stared into the green.We got a little rain and sighed into the cool-down. We watched the shifting colors of the sky. We exclaimed with delight at the fireflies.

No Facebook, no email, no phone calls from insurance companies and doctor’s offices.

It’s a long way from Atlanta to Booger Hollow. A happy long way.

Today’s penny is a 2008, the year that Montaluce opened for business.