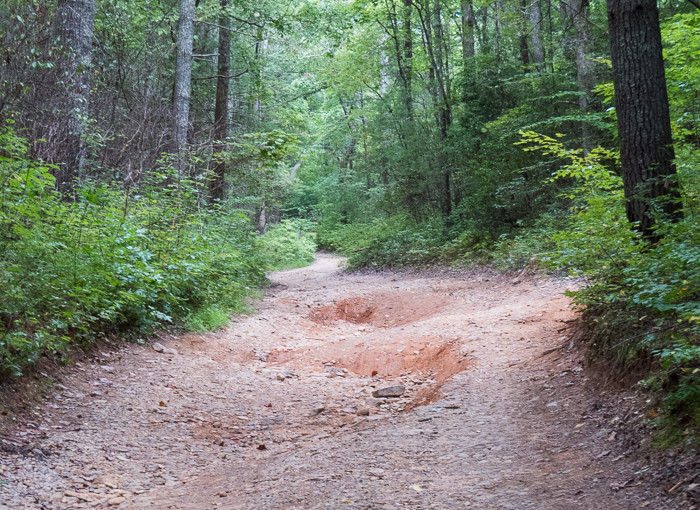 The road to Booger Hollow is about as bad as any road I’ve been on, including in Africa.

Booger Hollow is a 40-acre patch of private land smack in the middle of a national forest, where we have a cabin. To get there you first have to drive on several poorly maintained forest service roads, and then on Booger Hollow Road itself. You can see above the typical ruts.

Until today, we have only come here in our 1995 Jeep Wrangler, Anna Mae, whose very existence is intended for roads such as these.

However, being a jeep, she has a stiff frame and a suspension that is designed to protect herself, not her passengers. Anyone who rides in her on these roads gets an Anna Mae massage, as every bump’s vibration is conveyed directly into your back.

But Tom bought a 2006 BMW X3 in July, and he test-drove her on Booger Hollow Road.

So when Anna Mae decided this week that shifting gears was just too much trouble, we took Xena to our Booger Hollow cabin instead.

The difference was astonishing. In Anna Mae I’d gotten used to the feeling that we were seconds away from her entire frame coming apart at the joints, collapsing like some flattened box in a Road Runner cartoon.

In Xena, it was as though we were just taking a leisurely ride on a country road. No bumps, no strain – her six-cylinder engine growled contentedly as she climbed and dove up and down the obstacles with ease.

And there she sits in the cabin driveway, like a commercial for a Land Rover – in the midst of a place so remote that it should be inhabited only by toothless, unshaven, shotgun-wielding men.

This ride transformed my experience of the cabin. Instead of feeling like I was in a dangerously inaccessible place, I felt like a wealthy landlord come to my relax in my mountain retreat house.

Anna Mae is fun for her rough rides, and she can do roads a lot tougher than Booger Hollow. But she is a truck, and Xena is a queen’s carriage.

Those four coiled springs in Xena’s suspension work independently – that’s the secret. Together, it all evens out.

You need independent suspension to get through the potholes in life. You have to give way in one spot while you lean into another. That kind of flexibility makes the whole ride smooth.